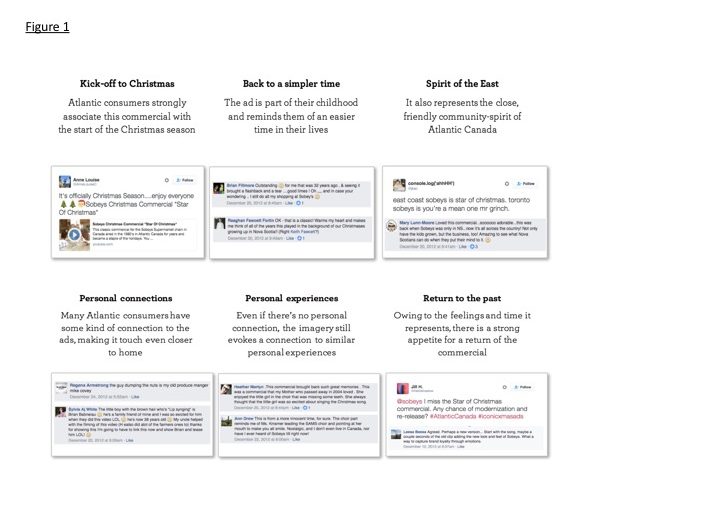 Section IA — CASE OVERVIEW
Why should this case win in the category (ies) you have entered?
Sobeys is a national grocery retailer with strong Atlantic roots. After almost 110 years in communities across Atlantic Canada, Sobeys faced a significant competitive threat and needed a program that was authentically Sobeys. To defend against an aggressive competitor in Sobeys’ home market, a beloved brand asset was revived and reinterpreted. This increased brand presence during a financially and symbolically important season, measured by overall brand performance, brand affinity, emotional response, purchase intent, and gap to market.

The “Star of Christmas” campaign is being submitted as an entry for the Brand Reawakening and Seasonal categories because of its focus on reversing a trend of declining performance through an emotional connection with customers that depended on strong associations between Christmas, family, and the Sobeys brand.

A longstanding Canadian brand, Sobeys originated in Nova Scotia when Frank H. Sobey persuaded his father to expand his business from meat delivery into a full line of groceries in 1924. Sobeys became such an integral part of the lives of Atlantic Canadians that “The Dictionary of Canadianisms on Historical Principles” includes “Sobeys bag” as a unique Maritimer term used to describe plastic bags1.

It is no surprise that Sobeys commanded the highest market share in Atlantic Canada for decades; however, this began to change in 2013.

In 2016 Sobeys faced a new crisis. For the holiday season of 2016, Walmart was taking an aggressive stance on price cutting:

“I said it before and I will say it again: We will win the season on price — on Black Friday, on Cyber Monday, and every day before and after” – Walmart Chief Merchandising Officer3

Walmart’s lower prices campaign began in the fall of 2016 immediately before the holiday season, one of the most significant seasons for Sobeys in terms of sales metrics. Sobeys had planned their conventional holiday campaign, but it became clear that it wouldn’t be enough to retain their customers. They needed to do something different. They needed to remind Atlantic Canadians of their connection with the Sobeys brand.

The connection between Sobeys and Atlantic Canadians was strongest before the brand became national in 1998. Looking at brand assets before national expansion, one clearly stood above the rest: “Star of Christmas”. “Star of Christmas” was nothing short of a sensation. Sobeys shot the commercial in 1987 and it aired annually in various formats until 2004, becoming integrated into the cultural fabric of Christmas in Atlantic Canada.

After a period of stabilization, Sobeys’ growth began a rapid descent when Walmart launched its lower prices campaign with sales declining -4.1% at a time when the market grew 0.8% from September to the end of October 2016. This -4.9% gap to market could not be allowed to continue.

Fighting a price war with Walmart was not a viable strategy, Sobeys needed to rely on brand. The problem was existing plans for the holiday season focused on key products and in-store activities, and not deepening its connection with customers. Sobeys needed to course correct, and quickly, by leveraging assets that Walmart couldn’t match including:

By re-activating “Star of Christmas”, Sobeys had the opportunity to connect with customers and the community.

Sobeys’ business objective was to decrease the gap to market in November and December 2016, reversing the downward trend.

To do this Sobeys needed to focus on brand, as measured by a significant improvement for those that recalled the ad, in overall brand performance (the percentage that rate Sobeys 7+ on a 10-pt scale for meeting what you look for in a grocery store) and brand affinity (rating on a 10-pt scale for how close do you feel to the brand).

The prediction was that nostalgia generated by “Star of Christmas” would be powerful and research revealed that nostalgia can drive people to action:

“Nostalgia …blends both positive and wistful features, and it is this longing that makes it a more active emotion than amusement or satisfaction, inspiring people to want to revisit or protect the things that trigger it.” – Dr. R. Tim Wildschut, Associate Professor, Psychology, University of Southampton

Next, the extent that people felt nostalgia for “Star of Christmas” was investigated. Social listening revealed that the original “Star of Christmas” campaign was present in social conversations nearly a decade after it completed. People associated childhood memories with the ad, it reminded them of time spent with family, and it brought them together as a community. There were even calls to bring back the ad with a more modern twist (Figure 1). 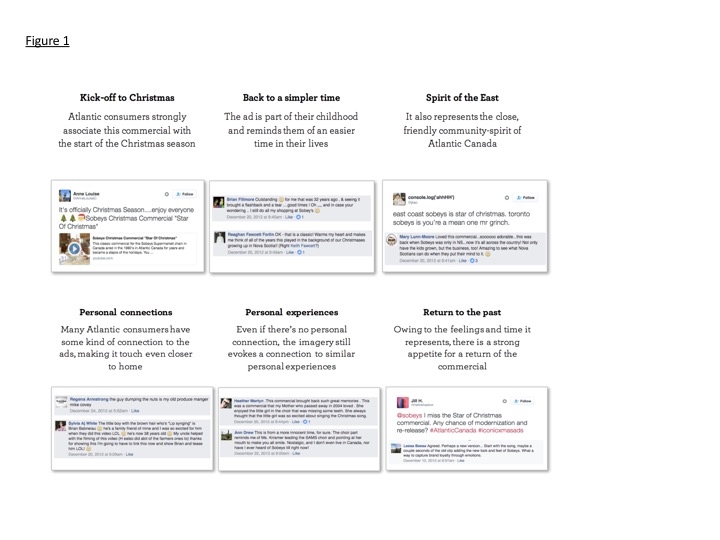 Research revealed that triggers of nostalgia included familiar images and music that tapped into cherished personal moments. To maximize these triggers, the campaign included the original song, visuals of a children’s choir singing and the Sobeys store being prepared for Christmas, and previous cast members.

The new “Star of Christmas” campaign needed to go beyond remaking the commercial to become part of Atlantic Canadian’s Christmas traditions again. In addition to the media campaign, the community was involved through events and charitable activities. It wasn’t enough to remind people of the emotional connection they had with the previous “Star of Christmas” campaign, a new emotional connection needed to be created.

The target audience was adults aged 35-55, who would have experienced “Star of Christmas” either as children or when they were starting to build their families. This group feels connected to their local community, which includes Sobeys, but in terms of shopping their basket sizes were declining and they were open to exploring options outside of Sobeys. The new “Star of Christmas” campaign was designed to remind them of spending Christmas with their family over the years and give them an opportunity to pass down their traditions to the next generation.

The goal was to make Sobeys part of Atlantic Canadian’s Christmas traditions again. This meant showing them that Sobeys was an active member of their community and could help them prepare for their celebrations. Creating this positive emotion through “Star of Christmas” would align with Atlantic Canadian’s feelings around Christmas and help insulate Sobeys from Walmart’s pricing tactic in a way that a more rational, or direct, response wouldn’t.

1. Pre-launch event: To build excitement prior to the release of paid media, the local community, store employees, the Sobey family, and some of the original cast members from “Star of Christmas” were invited to a pre-launch community event. Store employees participated in decorating the store (including putting up 30,000 lights on 100 Christmas trees), kids participated in cookie decorating, and over 350 people participated in singing “Star of Christmas”. In addition, an online media outlet in Nova Scotia, Haligonia, provided a sneak peak of the ad on Facebook before the release, which received an impressive 172,000 views, 2,925 shares, and 177 comments

2. Social campaign and paid media: An omni-channel marketing approach was employed including a TV commercial, brand radio spots, YouTube buy, local radio sponsorship, and social videos on Facebook. To increase opportunities for engagement a landing page was created with expanded content including behind-the-scenes event videos, interviews with previous cast members, ring-tone downloads with donations to local charities, a karaoke video, and sheet music of the song

3. In-store and community activation: A variety of events were used to create employee and community engagement. All Sobeys and Foodland stores were asked to participate in National Gingerbread Decorating day, held on December 10th. Employees also volunteered to participate in one of the largest Christmas parades in Atlantic Canada, the Halifax Parade of Lights, where the Sobeys Model T truck was decorated for Christmas and played the “Star of Christmas” song. In terms of community engagement, several initiatives contributed to food banks across Atlantic Canada The positive perception of “Star of Christmas” correlated with a direct impact on brand image. There was a significant lift on image statements for those who recalled seeing the campaign, including: affordable prices on private label / store brands; makes me feel good about my food purchases; and overall good value for money. There was also an increase in overall brand performance and brand affinity for those who recalled the campaign (Figure 3). 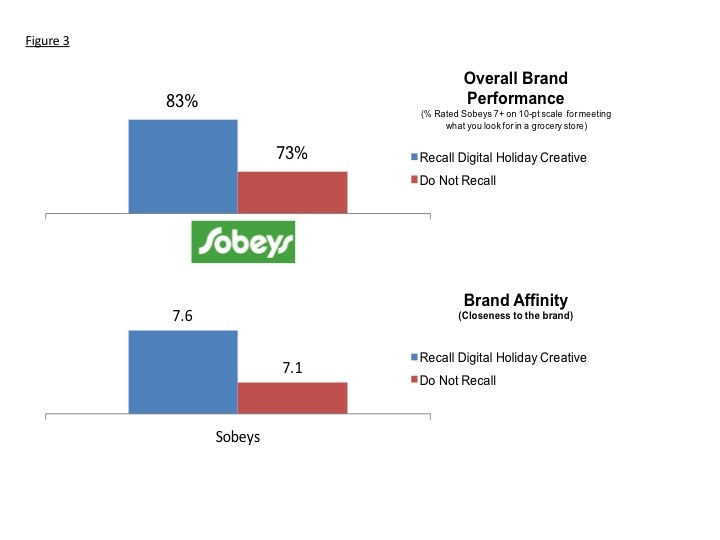 The 6.5MM+ paid impressions and 2MM+ video views generated 55K+ clicks; 400% more than the 12.5K planned. Sobeys’ web traffic increased by 25%+ above the 15K benchmark, with 43% engaging with content (>2x past performance), and 13%+ downloading song sheets and music. Video view rates exceeded industry benchmarks (35%+), over-delivering on views and digital impressions 165% with a 95%+ positive sentiment in the campaign’s social reach of >1.59MM.

When the ad was launched on YouTube, it was the only advertisement among Canada’s top trending videos, placing at #12 before paid support was applied. An amazing result given that the ad was tailored for consumers in Atlantic Canada. Viewers even created tributes, reactions, and mash-up videos in response to the campaign and were not shy about sharing their emotional reactions in comments (Figure 4). 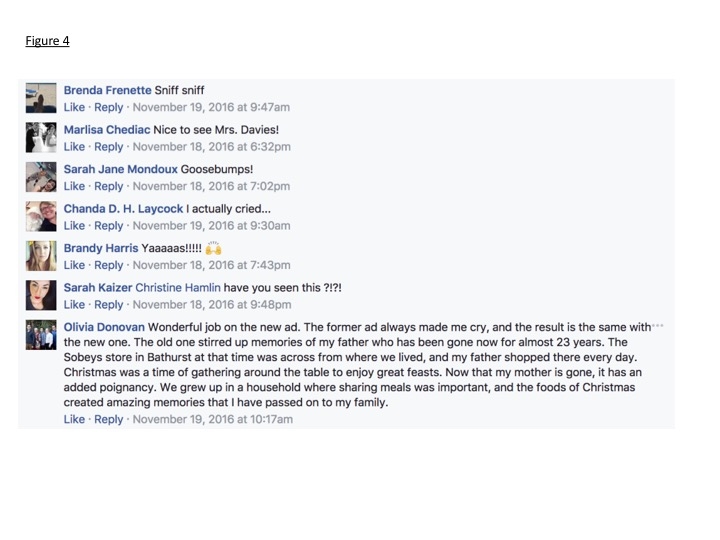 Equally impressive, the emotional connection correlated with purchase intent. Over 70% of people who experienced the campaign agreed that “Star of Christmas” made them want to shop at Sobeys (71% of TV viewers and 79% of radio listeners). Even when looking only at the respondents with the strongest reaction (who selected strongly agreed), “Star of Christmas” results were above the industry norm (Figure 5). 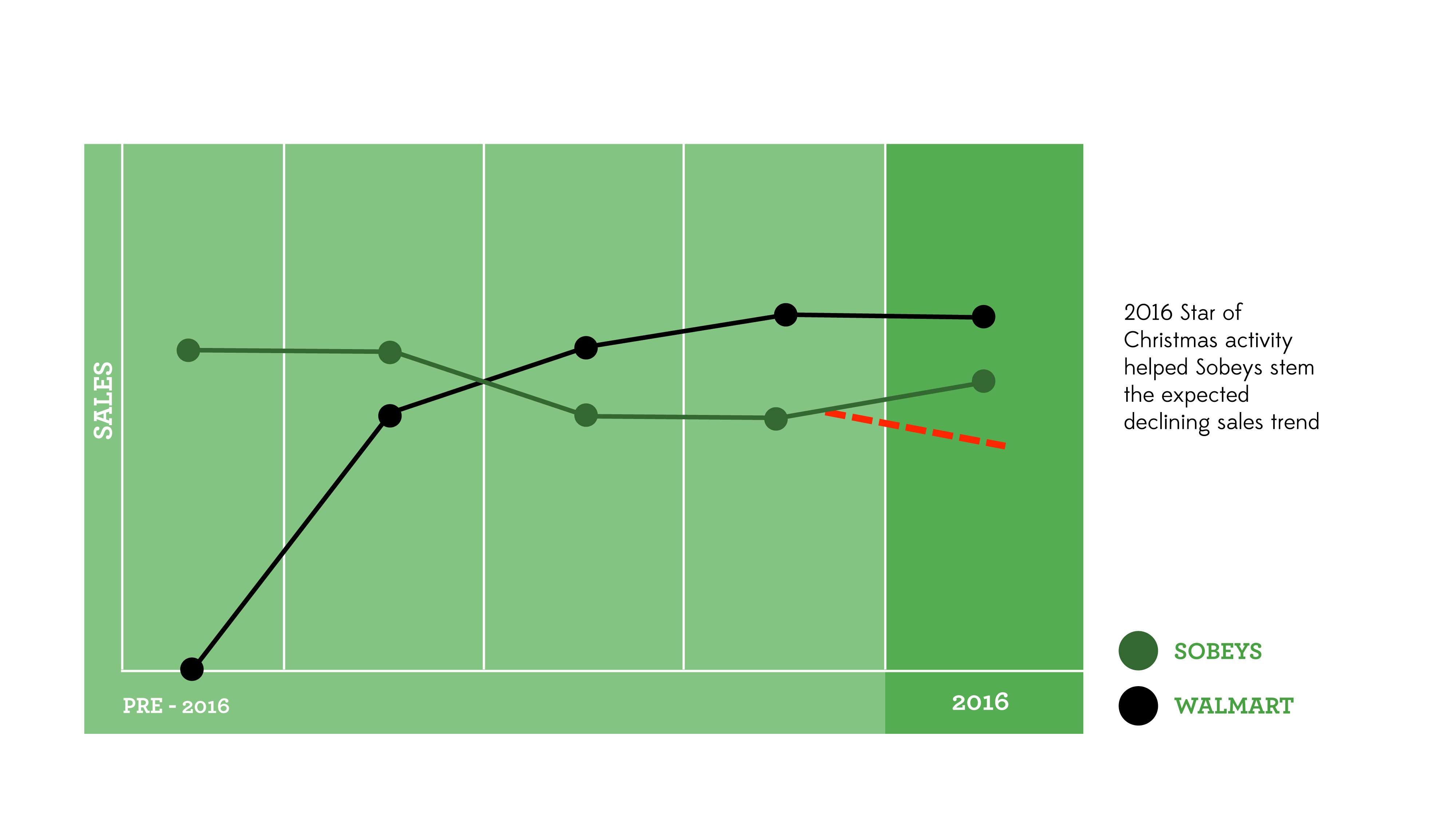 In terms of PR, 26 stories were shared online, in the newspaper, on TV, and the radio, including 4 broadcast segments on CTV Atlantic. “Star of Christmas” also received national attention and was captured in Canadian Grocer and Marketing Magazine.

The exceptional response to “Star of Christmas” was not limited to customers. Employee engagement also benefitted from the campaign. Store employees went above and beyond by creating unique in-store experiences for their customers to amplify the campaign, for example the staff at Sobeys Extra Clayton Park in Halifax created a 12-foot giant gingerbread man at their store to celebrate.

Based on average Sobeys sales in Atlantic Canada in 2016 and media, agency, and production fees for “Star of Christmas”, a 2.5% improvement in sales growth resulted in a significant Return on Investment of 395%

Strong recall of “Star of Christmas”, coupled with improvements in key metrics for people who recalled the campaign, shows that there is a direct link between the campaign and results. Recall of “Star of Christmas” was higher than the Sobeys holiday campaign in the previous year and industry norms for both radio and video (Figure 6). Furthermore, lift was seen across key brand drivers for those who recalled the ad, with a significant impact on convenience and promotions / loyalty (Figure 7). This lift in key brand drivers is consistent with the finding that those who recalled the campaign were more likely to select Sobeys as their first choice across the majority of departments (Figure 8). 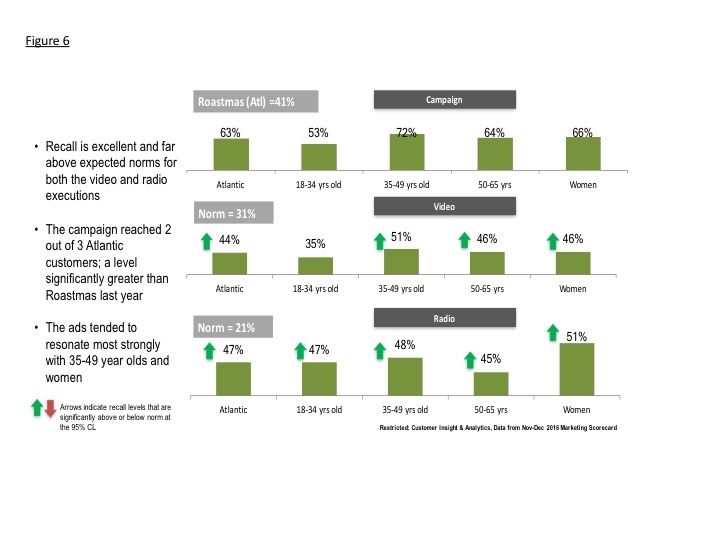 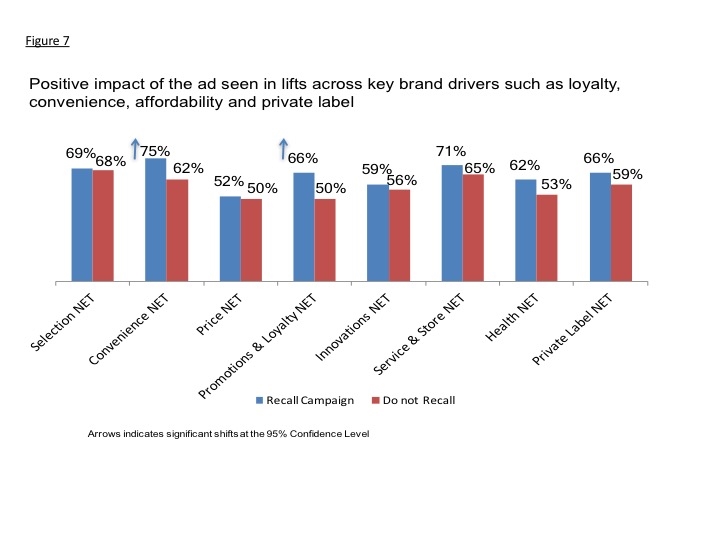 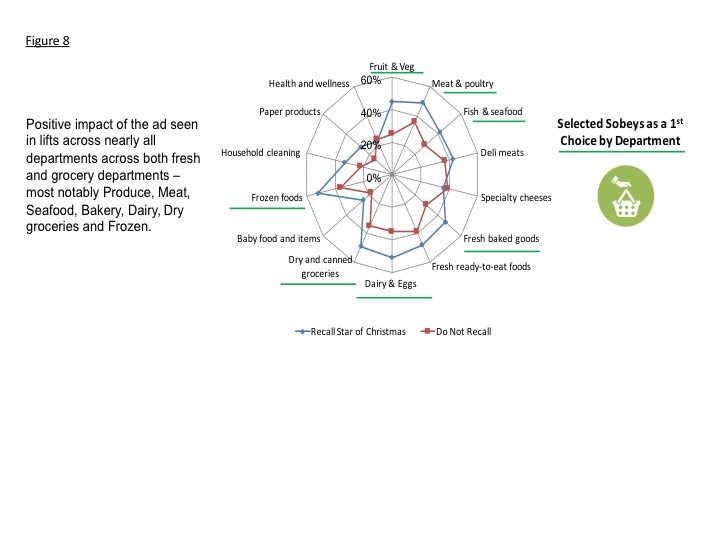 Other factors that did not drive the results include: