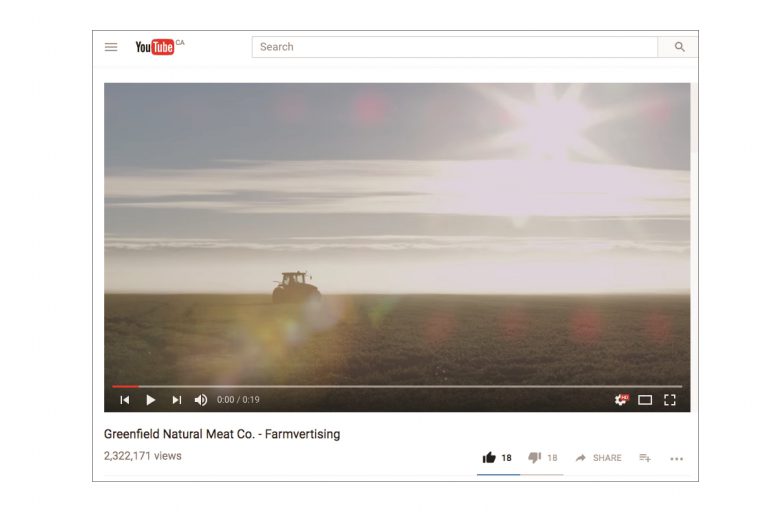 Section IA — CASE OVERVIEW
Why should this case win in the category (ies) you have entered?
This case demonstrates that as a direct result of Greenfield Natural Meat Co.’s inaugural advertising effort, Greenfield surpassed their objectives, secured 4 new major retailers and increased velocity by 59% YoY. As velocity indicates how well your product sells when it’s available to consumers on shelf, this measurement perfectly demonstrates the outstanding success of the campaign.

A purpose-driven business needs to follow through with purposeful advertising. Greenfield believes everything is made better by nature. We decided to build on that idea, put their money where their mouth is, and create a massive all-natural billboard in the heart of where their animals are raised. We then turned the footage into a campaign that further told their story and affirmed their message with retailers and consumers alike…naturally.

Greenfield naturally falls in to the crowded ‘catch all’ category “Raised without Antibiotics” (RWA), which, based on limited consumer understanding of the farming process, puts each of the 20 brands in a comparable place. This category includes many long established brands who enjoy high levels of awareness, including large retailers who have been ‘betting big’ by making significant investments in the category with their private label brands.

Greenfield was amongst the 2,600+ new brands, across 630 categories, launched in Canadian Grocery stores in 2016 [3]. They saw success during this time, validating the demand for the product. Within their first 18 months, Greenfield had not created any mass marketing campaigns.

Meat as a category is flat [3]. Our opportunity was to take Greenfield’s early momentum and super-charge it; to achieve this, our task was twofold. First, we needed to convince more retail chains to carry the product so that when consumers went looking for Greenfield, it would be readily available to them. Then, with the product on shelf aiding awareness, we would be able to introduce Canadians to this new brand and prove our credentials.

B2C Marketing Objective: Drive demand by building awareness of the brand while differentiating it within the RWA category.

Considering that Greenfield was the #1 new grocery brand in Canada in 2016, amongst 2,600+ new brands, without any advertising efforts, exponentially increasing their sales following this success was ambitious [4]. This put high expectations on the campaign to perform.

1] Greenfield does not ever give their animals antibiotics; therefore if one gets sick and requires antibiotics, they are treated and removed from the Greenfield program.
[2] Greenfield exceeds the standards required for humane treatment. All of their pigs are raised in open pens where they can freely move around, sleep, and socialize with other animals in clean and temperature-controlled barns; they utilize a gestation-crate free system.
[3] AC Nielsen MarketTrack.
[4] Nielsen MarketTrack, National All Channels, 52 Weeks Ending September 17, 2016.

We discovered that there has been a shift towards conscious consumption – Canadians are thinking about what’s in their food and are buying accordingly.

Meat producers have been making efforts to produce meat in better ways and our client, the Greenfield Natural Meat Co., is at the forefront of these “sustainable meat” efforts. This launch campaign was their opportunity to prove to consumers and supermarkets alike that they were approaching the production of meat in a new way and taking a leadership position in sustainable meat.

As a purpose-led brand, we uncovered that:

There is no shortage of brands talking about how “natural” and “sustainable” they are. Meat companies, both small and large, are covering their packaging with health claims and creating ads making promises of a better, cleaner product. The result of the onslaught of these promises diminishes the legitimacy of these claims to consumers.

Greenfield is one of the few brands that can actually make these product claims, as they are one of the only Canadian meat producers that can control the product ‘farm to fork’. They own the farms and processing houses, whereas their major competitors, such as DuBreton and PC Free From, purchase the animals from independent farms to process or purchase the already processed meat.

Even our advertising is all-natural. We would introduce Canada to the most sustainable meat, but we would do so with a campaign that was as sustainable the product it was selling.

Understanding that our key insights were not exclusive to the RWA category, we quickly identified that our competitive set should be expanded in order to identify the typical category conventions that ‘All-Natural’ represented. We had to evolve our approach to not only compete for the business of shoppers seeking options at the grocery shelf, but for the attention (and recollection) of consumers who were overwhelmed with the promise of ‘All-Natural’ from every other advertiser – from the big-spending QSR brands to the Cosmetics companies.

A creative analysis of brands promising ‘All-Natural’ revealed that the tactic to use ‘real people’ to endorse their products was popular, and, where we also had a story to tell with the real farmers behind our product, simply featuring them in the spot and asking consumers (and buyers at retail) to ‘trust us’ wasn’t enough. It didn’t equally represent Greenfield’s dedication behind their promise and product. It simply didn’t do the Greenfield brand justice.

This conclusion helped to both identify the path the creative shouldn’t take, but more importantly, understand how our message could take a big step out of the cluttered ‘all-natural’ world. We wouldn’t just say our advertising was all-natural, we were going to pull back the curtain, show it… and prove it.

From this moment, every decision filter we applied to this launch campaign was based on the solid strategy of action, not words.

While producing the campaign, we documented everything as proof points and conversation starters with both retailers and consumers alike (remembering this campaign needed to speak to both groups). We captured everything from interviews with the Manitoba farmers to footage of how we made the spot 100% natural and sustainable to the purchase of offsets equal to our team’s carbon footprint.

In order to separate Greenfield from the ‘natural’ clutter and confusion, we believed that by taking every effort to put our money where our mouth is, we would set a benchmark that only Greenfield could live up to, while educating Canadians on the real questions they should be raising about their meat.

To be successful with both retailers and consumers, we had to prove that Greenfield was living up to the brand promise. By doing so in a powerful, disruptive way, we would demonstrate that Greenfield was a completely different kind of meat company, setting the standards for the RWA category.

By creating a campaign that captured this, we could employ it for both B2B and B2C communications. The sales team would be provided with relevant assets to assist them in increasing distribution prior to the campaign launch, (so that the product would be available when the demand increased), as well as enticing new retailers to enlist. Upon launch, consumers would be educated via mass media, as well as specific targeted online channels to further communicate with those who share a strong interest in Greenfield’s values, in order to drive demand.

In advertising, building a 70-acre all-natural billboard is dedication and proof of having a purpose. 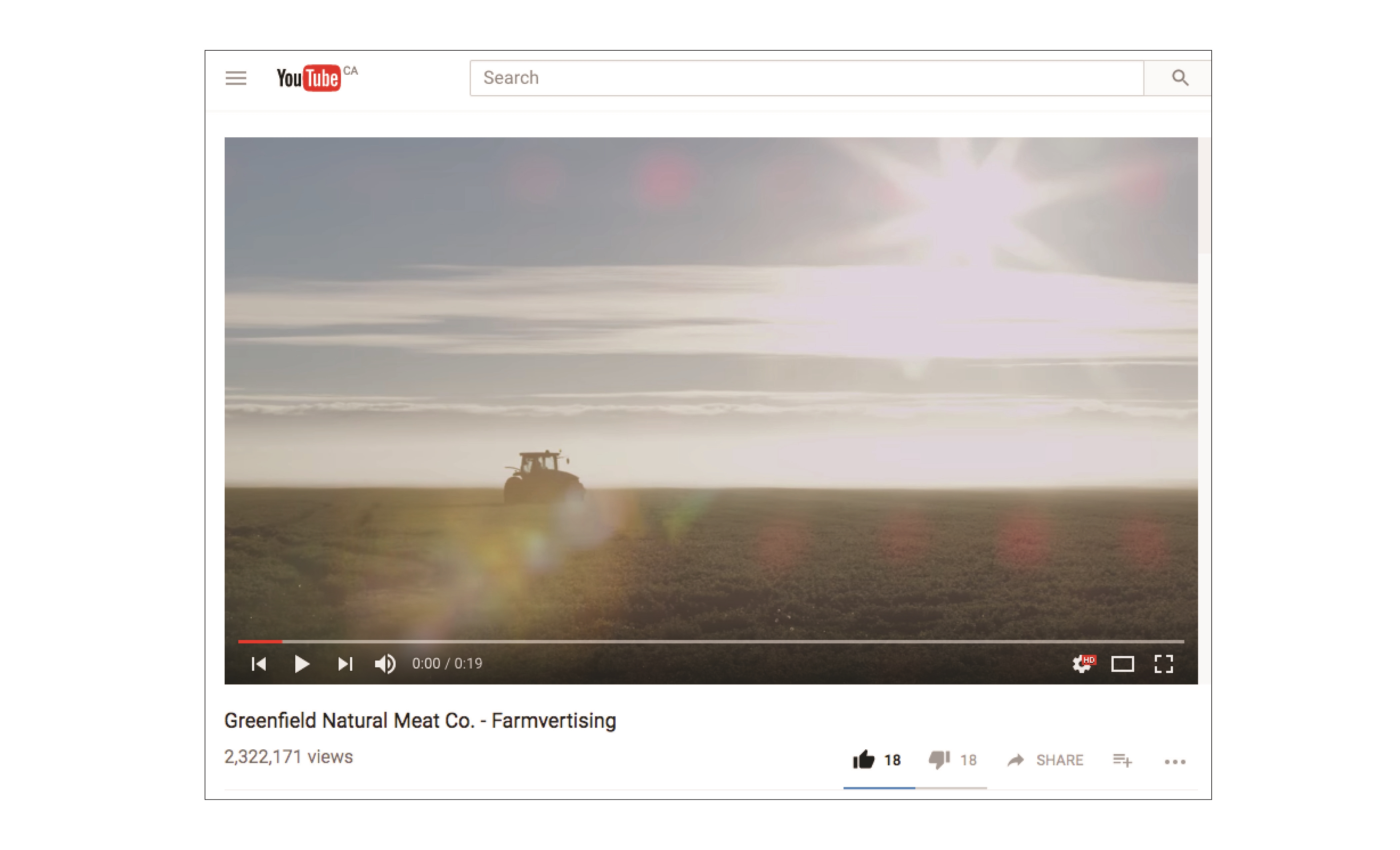 We travelled to Landmark, Manitoba, where the vast majority of Greenfield pork is raised. We worked with a local farmer to let us carve a headline into his 70-acre alfalfa field, ensuring that it was about to be tilled so as to not destroy viable crops. Subsequently, we created the world’s largest sustainable billboard – the headline read: Made Better by Nature, Not Antibiotics [10]. 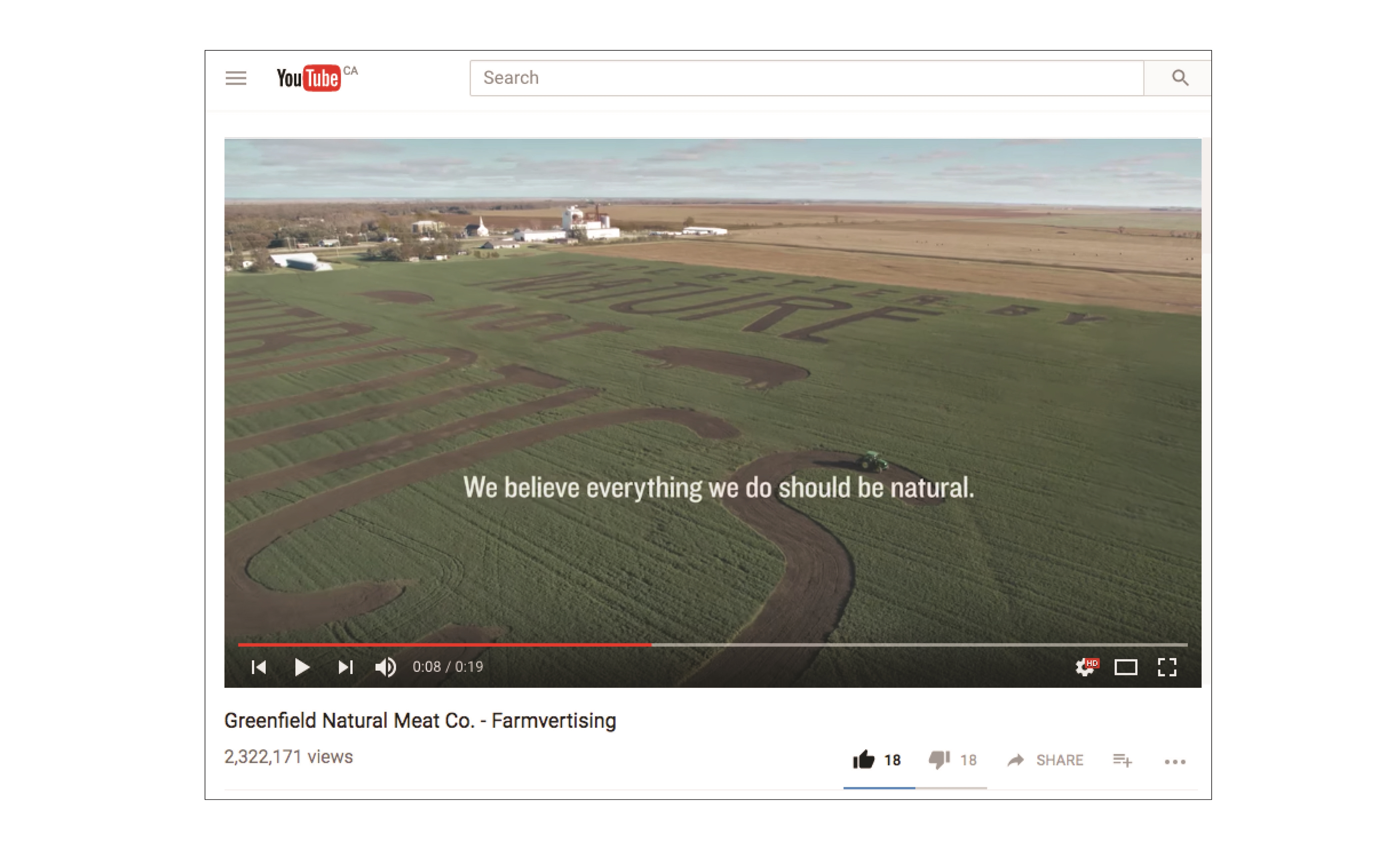 The filming of this event formed the basis of our launch video. The video explained that Greenfield believed that meat deserves to be made in a better way, and that they were so serious about being sustainable that they even wanted their ads to be all-natural too. Prior to the campaign launch, we provided the sales team with a long format video to sell retailers on the brand purpose and anticipated demand, while demonstrating the support the product was going to receive in market. 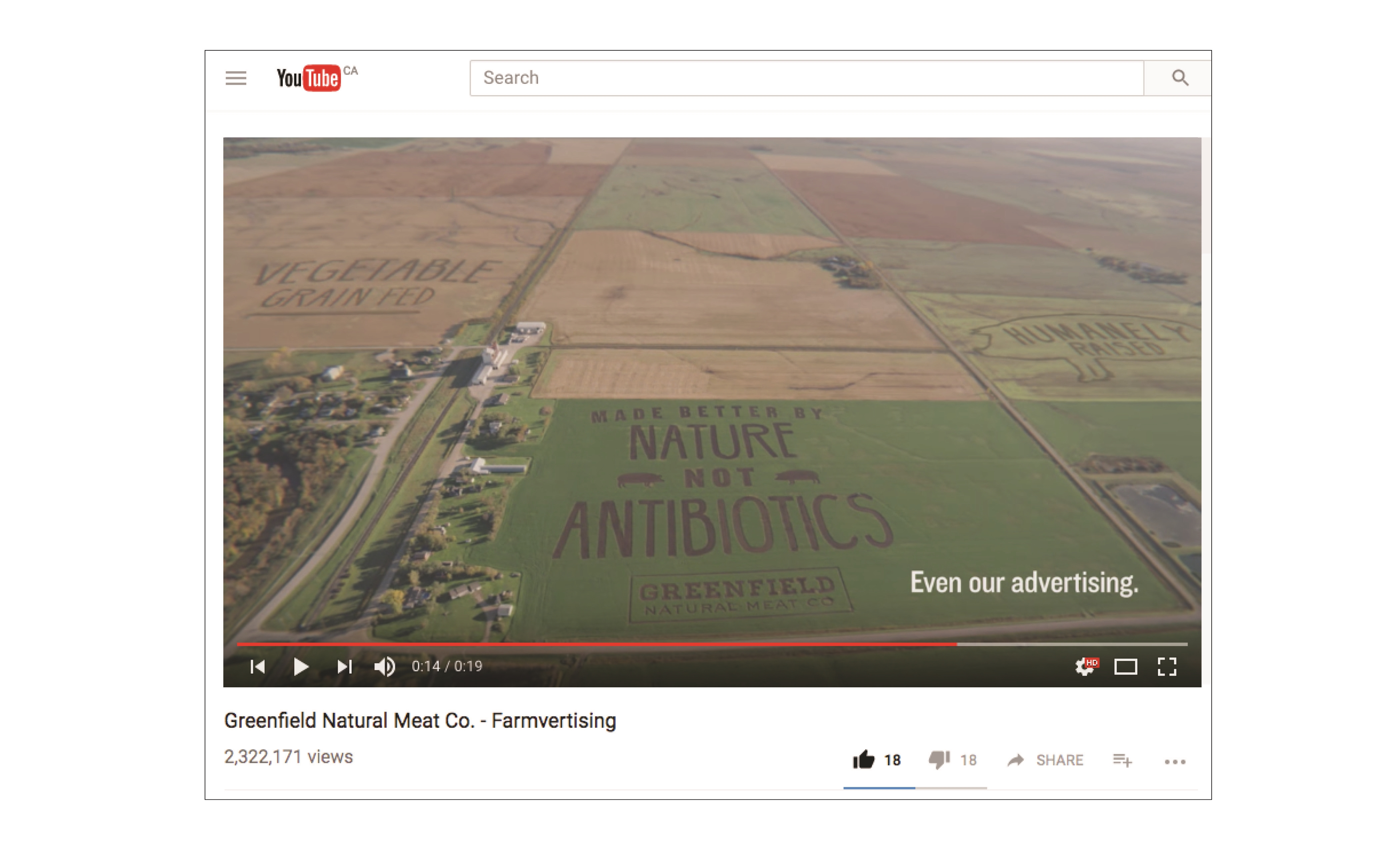 We also created a 30-second version that ran on television, as well as a 15-second version that ran as YouTube pre-roll, in addition to both being utilized on Instagram and Facebook. Each of these videos led to a website that housed more information on Greenfield’s commitment to sustainability. Included were interviews with Greenfield farmers and hog producers – video assets we had produced in Manitoba – further demonstrating Greenfield’s commitment to their mission. The campaign was further supported by static social posts and ads that further instilled our all-natural credentials. Finally, to ensure that this campaign was completely sustainable, we worked with Tree Canada to plant 150 Jack Spruce trees in Southern Manitoba in order to offset the carbon emissions from our team’s travel and accommodation, as well as the fuel needed to run the drones and helicopter used in filming. 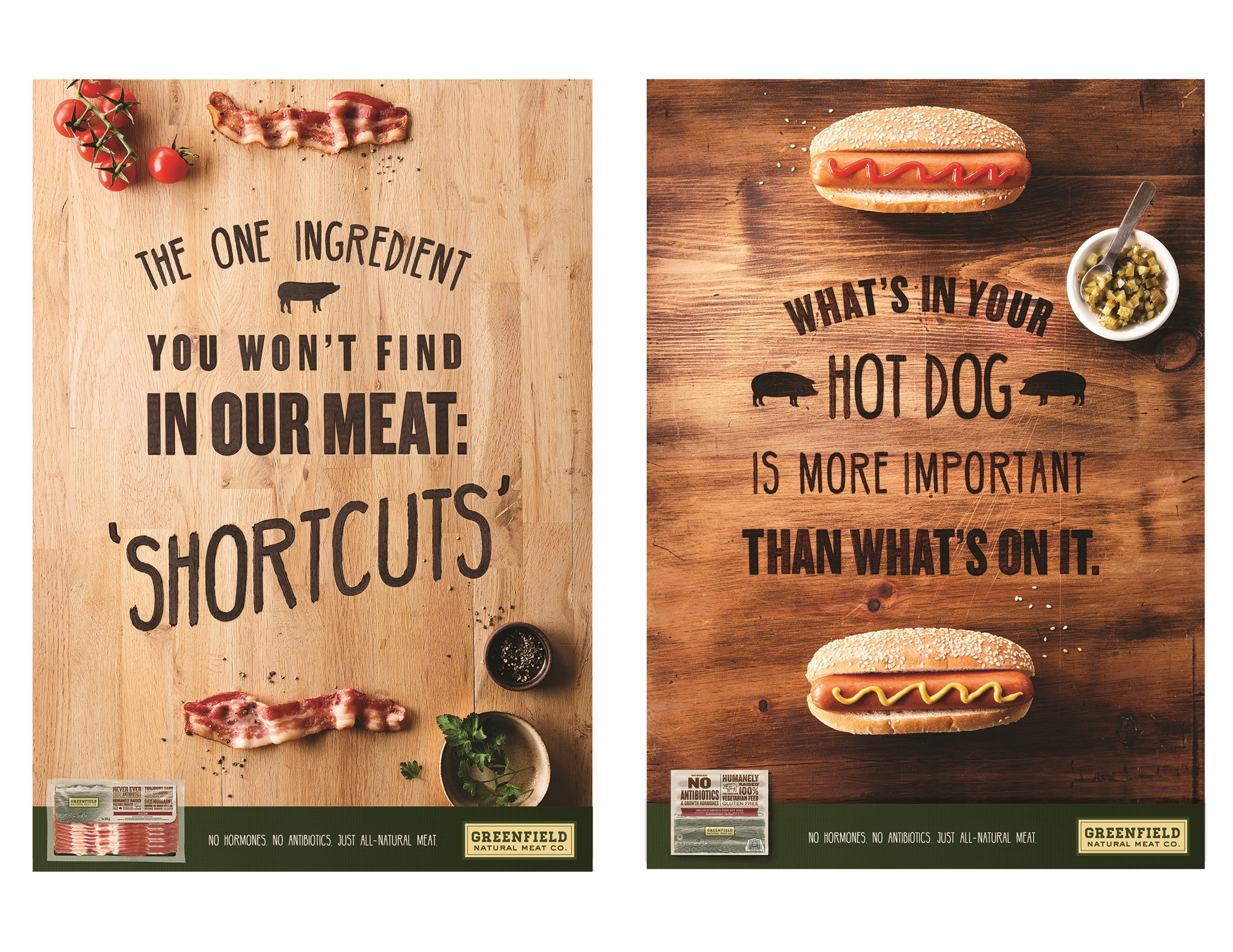 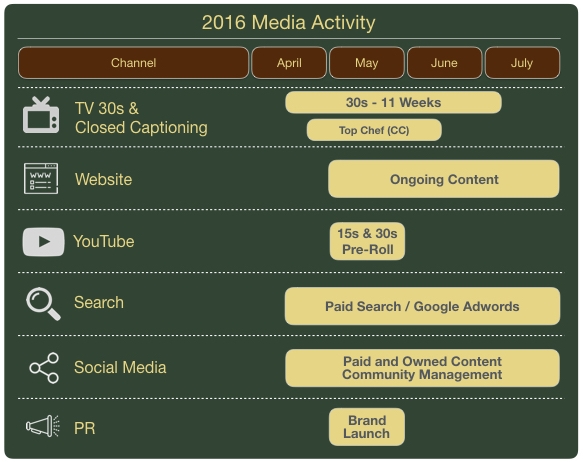 [10] While there are examples of designs and mazes carved into fields (predominantly corn fields, for conversational and physical entertainment), and examples of billboards or logos being designed onto photos of fields, our research was not able to find any examples of an actual carving of a billboard of this type and size.

Finally, whereas the Canadian YouTube ad average view through rate is 29% [11], Greenfield achieved much stronger results:

The campaign also had a significant impact on the Business Results [12]:

Furthermore, the individual product category results were impressive across the board during the campaign period: 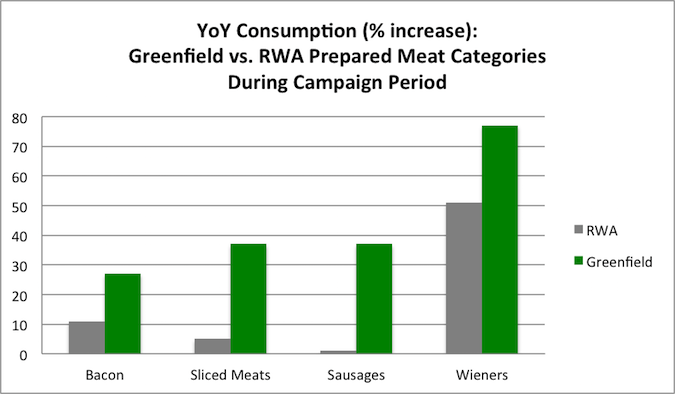 By proving that Greenfield’s commitment to sustainability was real to both retailers and consumers, our campaign made a real impact on their business.

In a post-campaign study conducted by Nielsen, it was stated that during the length of the campaign, Greenfield experienced exceptional volume and sales growth, noting that the campaign helped drive more organic brand growth in this time period as well [13]. As demonstrated by the Business Results, reinforced by the consumption patterns over the past two years (as seen below), there is no doubt that the results were driven by the campaign.

Data for a previous brand launch by Maple Leaf Foods is not available to compare with.

Greenfield was the #1 new brand, in dollar sales, during its first year of launch [14].

The average price per unit only fluctuated within $0.20 during the campaign period. Conversely, unit prices were up by an average +6.6% during this time, YoY [14].

Greenfield experienced exceptional volume and baseline growth in spite of distribution losses in the West as a result of external factors [15]. Due to changes in the overall corporate strategy of Sobeys West, Greenfield lost distribution on some SKUs (notably Wieners), resulting in a business decline at this specific customer. Conversely, Greenfield experienced significant growth at Save On Foods (another Western Customer) which demonstrates the effectiveness of the campaign in the Western region, despite isolated challenges at Sobeys/Safeway.

The level of promotional activities at retail level remained consistent with those prior to the campaign period.

Redesigned packaging availability coincided with the launch of the campaign. While we were not responsible for the design of the packaging, we consulted and ensured that the look and feel, such as fonts and layout, were cohesive with that of the campaign.