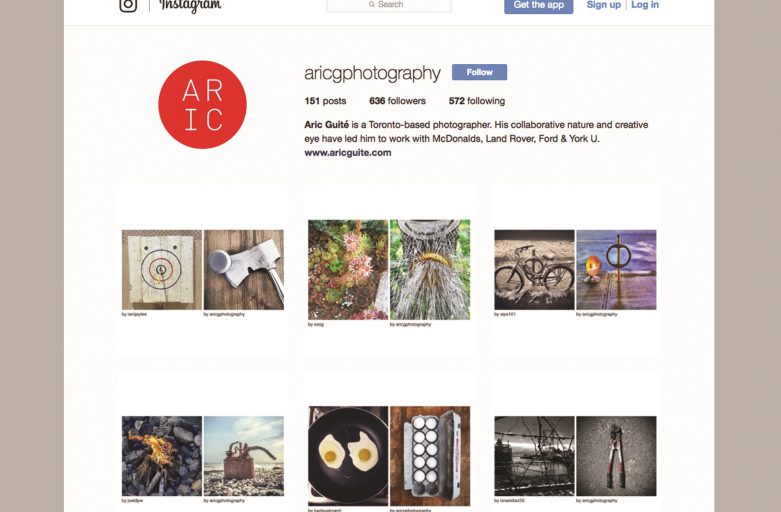 Section IA — CASE OVERVIEW
Why should this case win in the category (ies) you have entered?
This case demonstrates that by using a low cost, hyper-targeted approach in an innovative way, we were able to outperform all business objectives of the campaign and build relationships that will continue to generate future business.

For decades, advertising photographers have been reaching out to Art Directors in the same way – they mail out postcards with examples of their portfolio. And in all that time, these printed promos eventually end up in the exact same place – the recycling bin. Toronto-based photographer Aric Guité approached us to help him find an entirely new way to capture the attention of ad professionals and also to showcase his varied photographic skillset. We specifically targeted a curated list of individual Art Directors on their favourite social media platform, Instagram, capturing their attention with complimentary photography and witty copy.

Aric Guité is a Toronto-based, multiple award winning photographer who apprenticed for one of the top photographers in Canada at the largest photography studio in the country. But, like every other photographer in the advertising industry, Aric had a consistent portfolio postcard strategy. He would create a series of new cards and send them out to Art Directors he had worked with and also to new Art Directors he admired or had always wanted to work with. This system of direct mailing had a response rate of about 5%, and of that only a handful would hire him.

Our main challenge was to capture the attention of Toronto-based Art Directors in a way that would get them to respond to Aric and book him for jobs, immediate or future. In order to do this, Aric had to stand out amongst all the other photographers vying for these busy Art Directors’ attention.

Futuremore, as a photographer who has chosen to not be represented by an agent, Aric is at a disadvantage. Since he is not put forward for jobs by an agency, he has to make connections and find the jobs himself.

Finally, until mid-2014 Aric had been working under another photographer, Chris Gordaneer, so he had little to no brand awareness as an independent photographer. In 2015, he employed a traditional direct mail campaign with postcards highlighting his work. He had a 5% response rate and secured only 2 jobs as a result.

Marketing Objective 2: Increase total number of contracts, and the value per contract, in 2016.

Between 2010 and 2013, Statistics Canada has stated that Arts, entertainment and recreation small businesses had a 4.6% average revenue increase. In this context, a 10% increase is ambitious [1].

The target for this campaign was incredibly specific: Toronto-based advertising Art Directors. While each of these individuals is unique, one of their main similarities is that they all love photography. While this is not a new learning, as we curated a list of Art Directors that we wanted to target, it became clear that – more specifically – they all love their own photography.

Our next insight was based on an understanding of our target’s behaviour and mindset. We analyzed the social media platforms this target uses and Instagram stood out as the most popular. As a visual-focused platform, this is a natural fit for our target. It also allows them to feature their own photography and non-directly compete with their colleagues, where views, likes and comments equate to social currency. They use Instagram to have their art acknowledged.

Imitation is the sincerest form of flattery. Create complimentary photos inspired by the photography of specific Toronto Art Directors; post the images as a pair on Instagram, and tag the Art Director within engaging copy suggesting collaborative work.

We knew that if we could find a way to showcase Aric’s work on Instagram, we would be able to connect with our target in a place that is contextually important to them and much more convincing than a simple postcard.

Instagram also provides an opportunity to be highly targeted. Rather than sending one generic piece of creative to the entire industry, we could tailor our direct messages to each recipient, maximize the interaction through creativity and flattery, and increase our chances of a response.

Lastly, we believed that if we acknowledged the Art Director’s work on a public platform (that would in turn share their work), it would generate a higher response rate.

From our curated list of Art Directors, we selected a photo from each of their personal collections that we felt could lend itself well to collaboration. We then created a complimentary photo, one that would not only work well with the selected photo, but one that would also highlight Aric’s talent and celebrate the selected Art Director. By doing so, along with the playful copy, the communication would engage the targeted Art Directors and encourage communication between the them and Aric, increasing the response rate and thereafter increasing billings.  Furthermore, by highlighting photography, the work would speak for itself and interest industry specific publications.

To begin this campaign we sat down with Aric to create a list of the top 50 Art Directors that he had always wanted to work with and narrowed the list down to 26 based on location, whether or not they had an active art-based Instagram account, and whether the type of photography they produced would lend itself to collaboration. 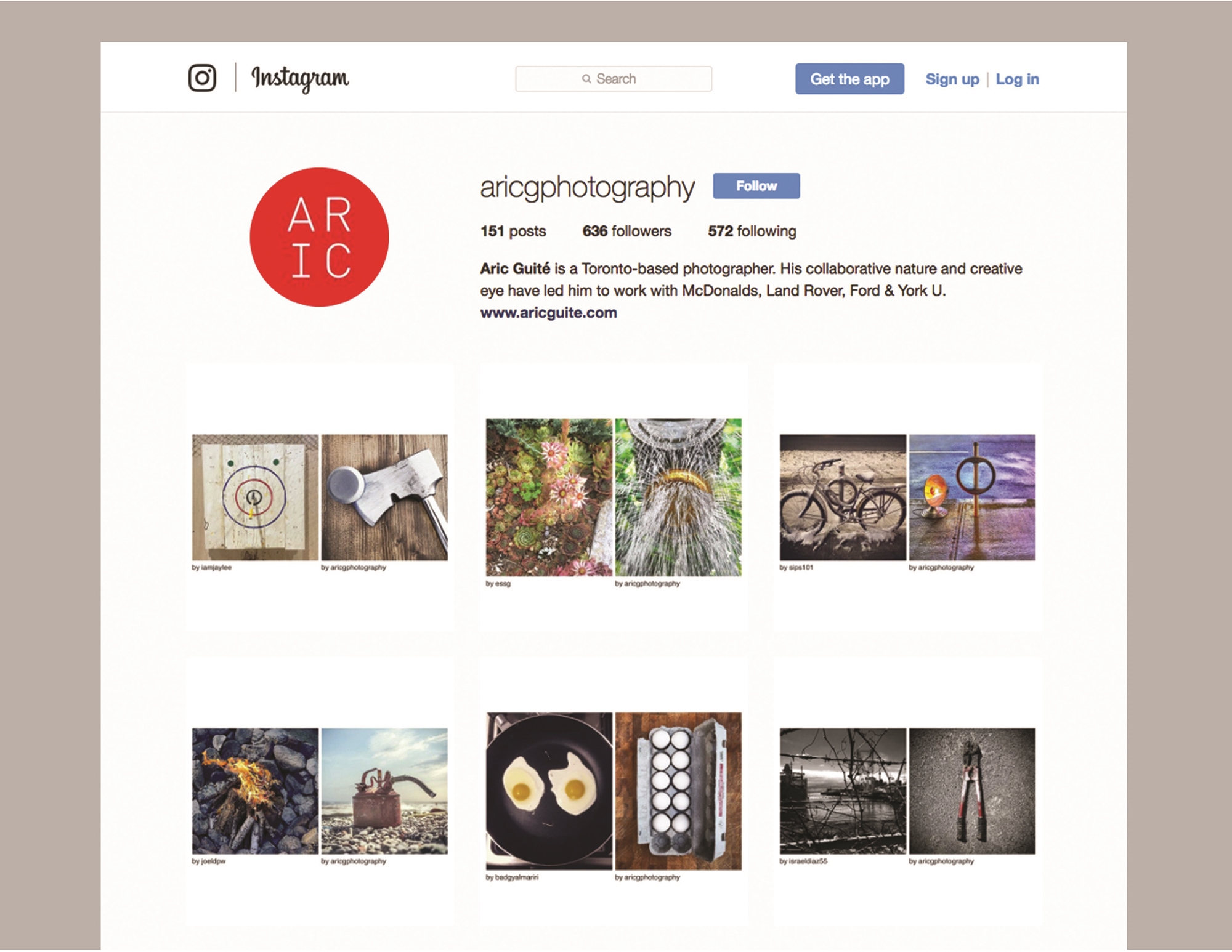 We then went to the personal Instagram page associated with each Art Director, and combed through to pick one iconic image from each. Aric then created his own photo that answered or accompanied that original Art Director image in a funny or thought-provoking way. Subsequently, he combined the images into one Instagram post that he added to his account @aricgphotography. Then we wrote an interesting personalized comment that referenced the original photo, tagged the Art Director, and suggested working together. 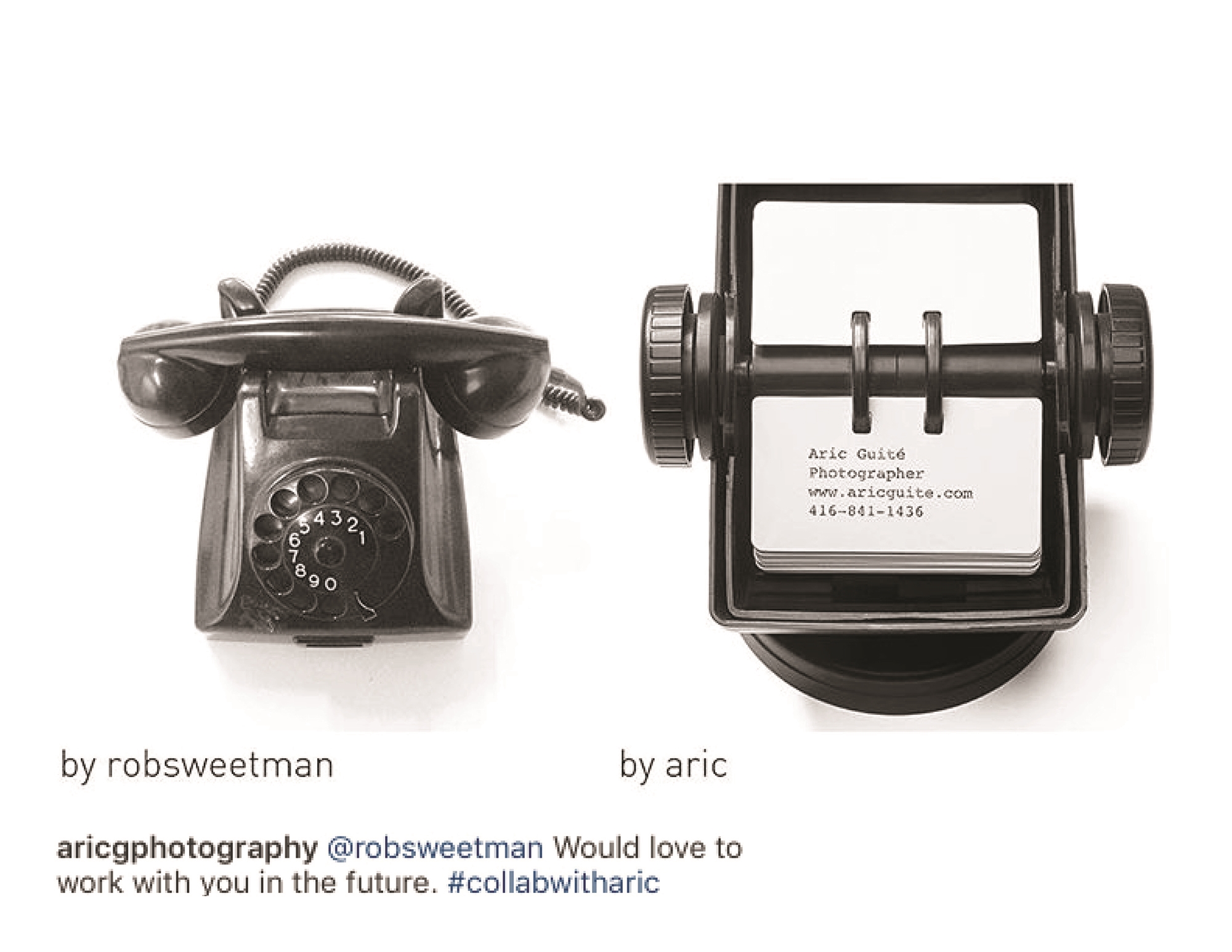 Each of these combined posts illustrated Aric’s talents and varied abilities, while also showcasing his sense of humour and his ability to collaborate. And by celebrating the Art Director’s original photo, it was a subtle way to flatter his intended target and initiate a conversation. 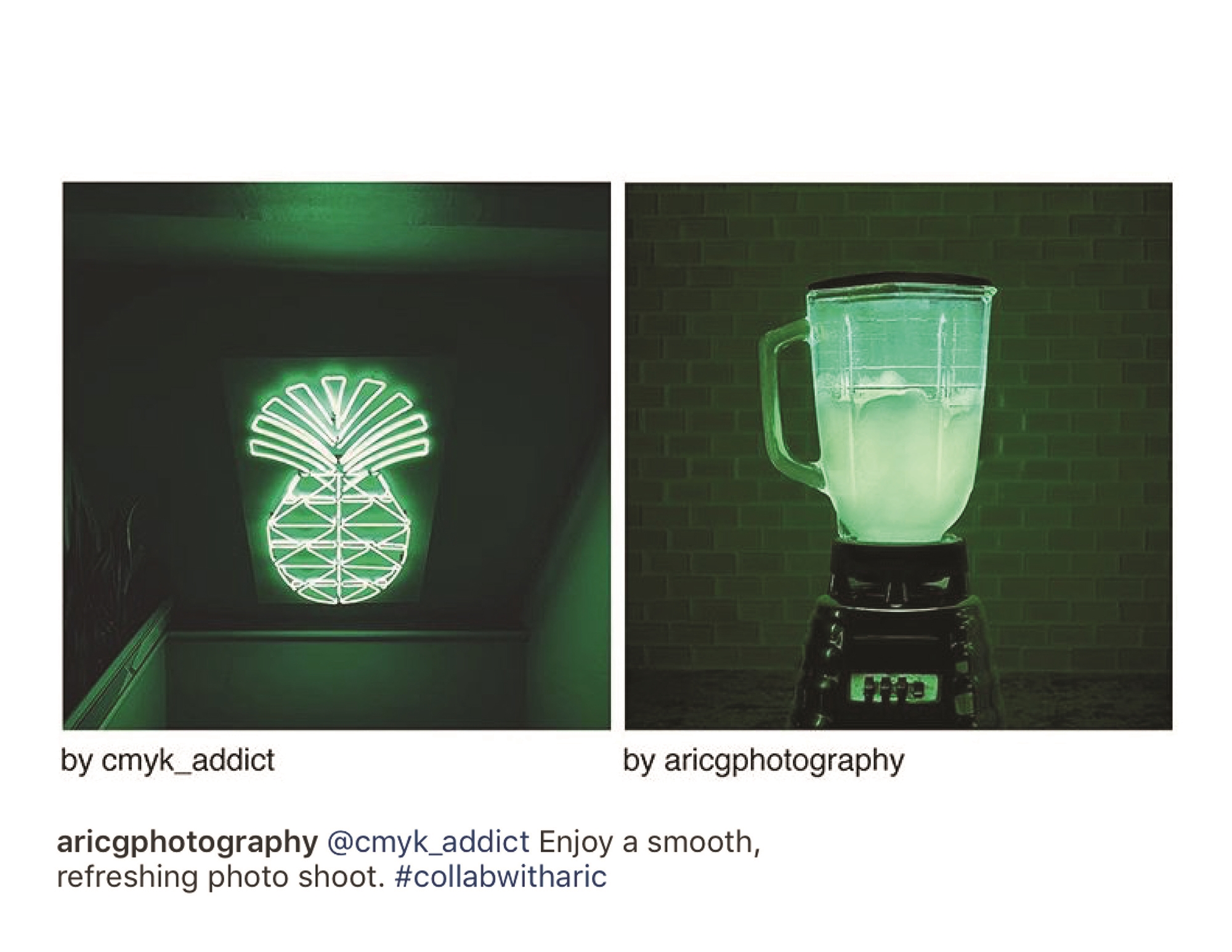 As this direct mail promotion was delivered through Instagram, we knew the intended target could not ignore it in the same way they do the printed ones. Each of the 26 Art Directors received a push notification on their phone, as well as one within the app, that directed them to their personalized Instagram post. It forced them to engage with this hyper-targeted version of direct mail. 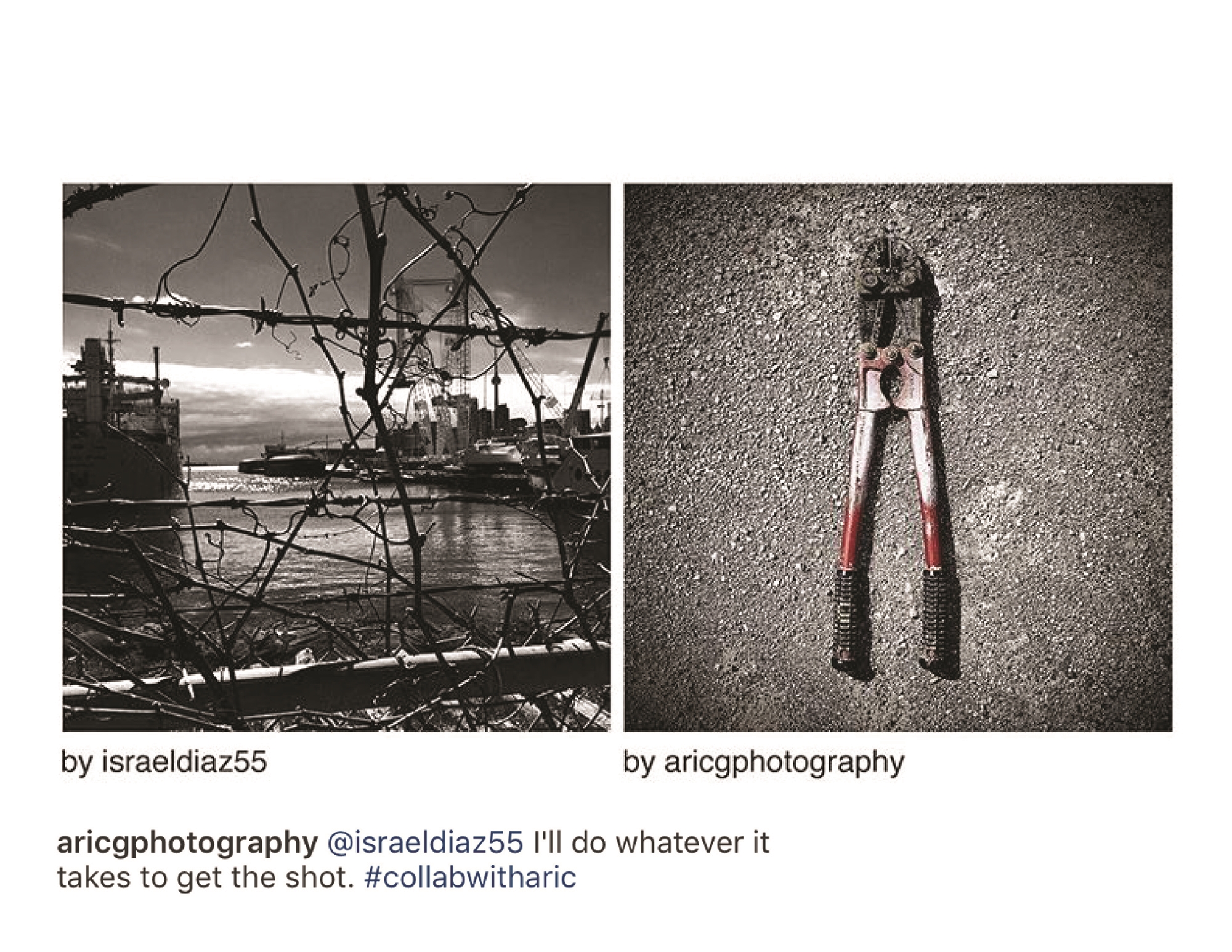 Then once on Aric’s page, the Art Director would not only see the work that he created utilizing their photo, but the dozens of other examples, each more different than the next. The implied takeaway being that Aric would be an excellent choice regardless of the type of shot needed for their next project. The copy then served as an invitation to engage and initiate a relationship. 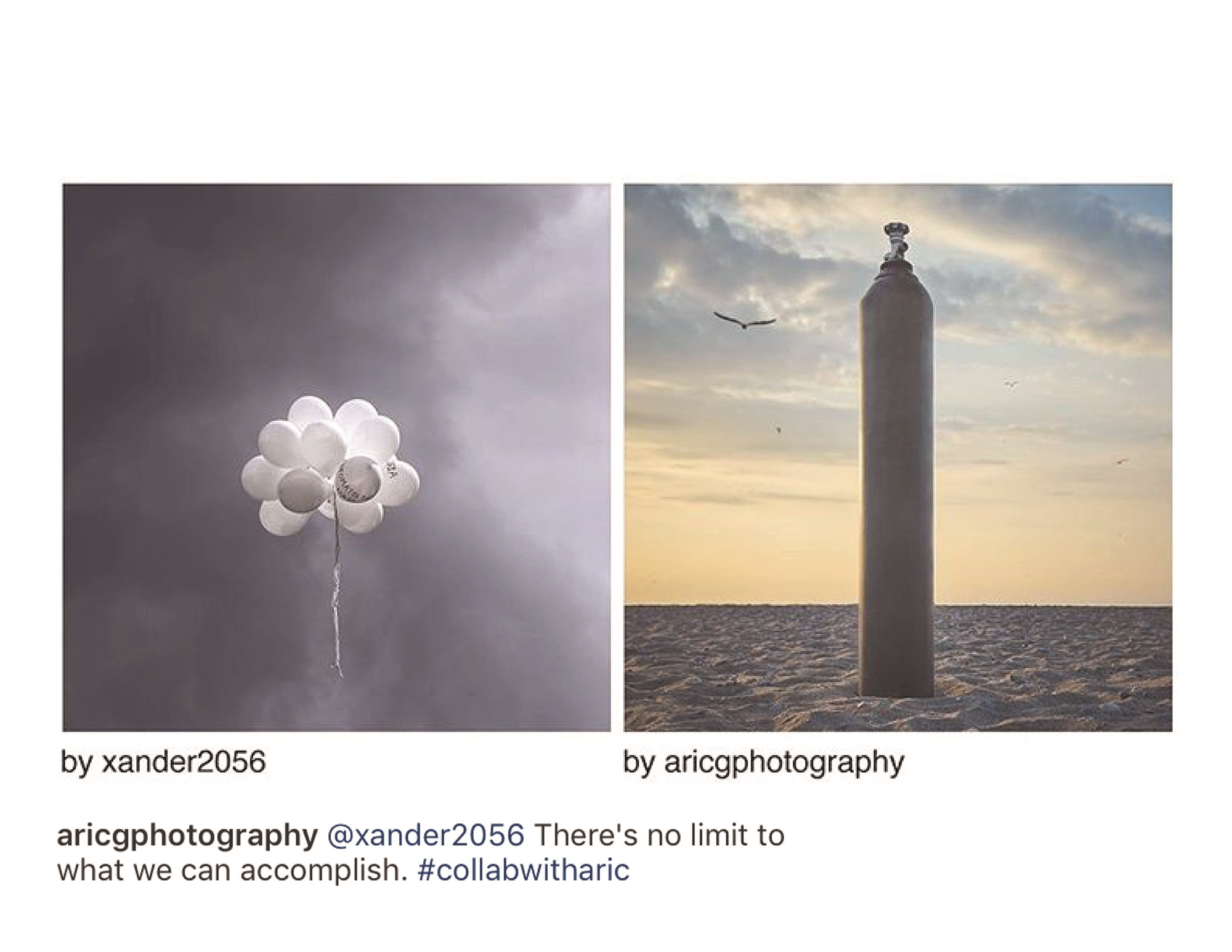 This was a hyper-targeted organic campaign, no dollars were put towards any paid media. The budget was spent completely on producing the photography for the campaign. We also did press outreach to a few (3) of the most relevant advertising specific publications.

This campaign significantly improved overall brand awareness for Aric Guité, outside of the specific Business Results, which can best be demonstrated via behavioural changes on Instagram where this campaign took place.

The work surpassed all of the Business Objectives for this campaign [2]. 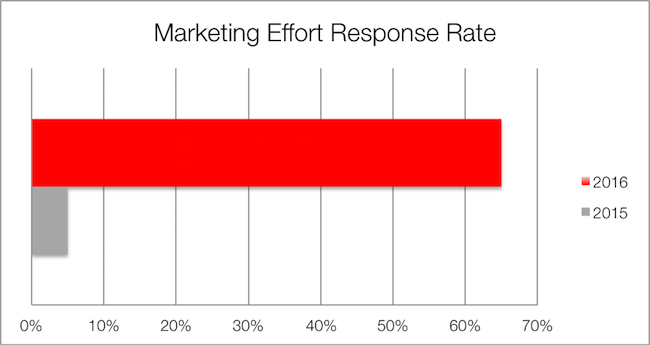 Furthermore, these are merely the direct numeric results of the hyper-targeted campaign. Aric is still in contact with, and has formed professional relationships with, 20% of the targeted Art Directors. This will lead to jobs with the target in the future, and has also served to increase his brand awareness.

As a result of the campaign exposure, Aric has increased his daily rate by 50% due to an increased client demand and larger budget projects.

#CollabWithAric won Gold in Self-Promotion at the 2017 Marketing Awards.

The campaign had a 5:1 return on investment, and this does not take into account future work that will come from the relationships built as a result of the campaign [4].

[2] All data has been provided by Aric Guité.
[3] Since we did not work with a PR agency, as it was not within the budget, we do not have exact numbers for the impressions. This is a conservative estimate based on the public information available for the publications, such as number of social media followers, shares per article, etc.
[4] Although we are unable to disclose the exact financial details, Aric processed the calculations based on profit from the work secured as a result of the campaign versus the campaign investment, and provided the results in ratio form.

2016 was an influential year for Aric Guité. As a direct result of the this hyper-targeted campaign, Aric communicated with 9X more Art Directors, secured 3X more jobs, and significantly increased his brand awareness through unprecedented press coverage and social media, in comparison to his 2015 campaign. As a result, Aric’s annual income growth for 2016 was 15%, which is above average for him based on his reporting.

The budget for Aric’s 2015 direct mail campaign was $2,000. While Aric intended to spend the same amount for this campaign, he spent $1,000 more for the 2016 campaign, totalling $3,000. The costs for 2015 only covered print production and distribution, whereas the budget for 2016 covered producing the photography, which included the rental and purchase of props, equipment, and other materials, which are inherently more expensive.

No change in daily rate during the campaign.