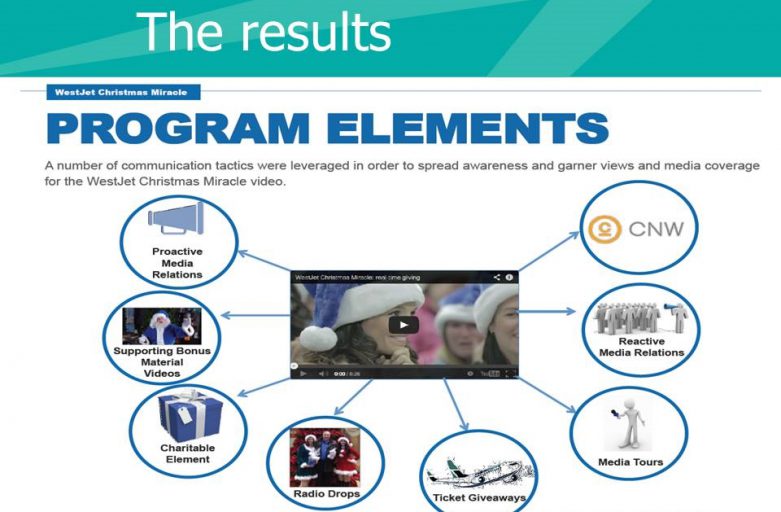 WestJet is Canada’s most preferred airline, offering scheduled service to more than 85 destinations in North America, Central America, the Caribbean and Europe. Through WestJet’s regional airline, WestJet Encore, and with partnerships with airlines representing every major region of the world, WestJet offers guests more than 120 destinations in more than 20 countries. Top competitors are North American airlines, including Air Canada, Porter, JetBlue, SouthWest and Virgin.

While WestJet is well known by its guests for creating fun, timely  consumable video content throughout the year, WestJet wanted to provide a unique live experience for guests and WestJetters (employees) and stand out amongst a greater audience during the Christmas season. The challenge in 2013 was to bring a memorable, heartwarming, and shareable “real-time giving” experience to both airline guests and employees alike.

The goal was to create, capture and share an activation whereby guests could truly witness, and interact with, WestJet’s fun and caring culture in an environment that is typically slow and dull, giving them a warm and joyful holiday experience they would share with friends and family and remember for years to come. Having executed a successful activation the previous year – The WestJet Holiday Flashmob – it was important that the 2013 holiday campaign and its surrounding communications be even more joyful and exciting to reach a larger audience with greater impact. Furthermore, a compelling idea amplified with a strong social media and communications plan were required to break through the clutter of branded holiday activations, as well as increasingly strong online content shared by both brands and consumers.

WestJet posted the WestJet Christmas Miracle: Real-Time Giving holiday video on its YouTube page on December 9, 2013, and within days it was the most shared Canadian viral ad in 2013, and among the top five globally. With the support of a strategic communications plan, and promoted posts on Twitter and Facebook, YouTube views and media impressions far exceeded program objectives, contributing to an unexpected and unprecedented increase in sales for WestJet, during the holiday period.

WestJet and its partner agencies developed a strategic “real-time giving” storyline for the 2013 WestJet holiday video with the goal of capturing the hearts of target audiences and creating content that was timely and sharable. WestJet delighted unsuspecting travellers with a real-time holiday surprise that delivered personalized gifts to guests arriving at their destination.

To create buzz and lift views immediately upon launch, WestJet and its partner agency developed a strategic communications plan focused primarily on earned and owned media creating early awareness with key media, proactive media relations strategy at launch, and continued media and influencer outreach, seeding and management. Including a charitable tie-in provided incentive for early media pick-up and reinforced WestJet’s charitable, caring brand culture. Key messages and Q&A documents were developed early in the campaign and integrated throughout all communications channels and six WestJet spokespeople, which was critical for successfully owning the story throughout the campaign.

While the audience for this program was quite broad, there were several key insights that played into the communication strategy development and implementation:

WestJet delighted unsuspecting travellers with a real-time holiday surprise that delivered personalized gifts to guests arriving in Calgary via a “Virtual Santa,” a Digital Command Centre, and more than 150 volunteer WestJet employees (WestJetters), as part of a true “Christmas Miracle.” Nineteen cameras captured the emotional experience. 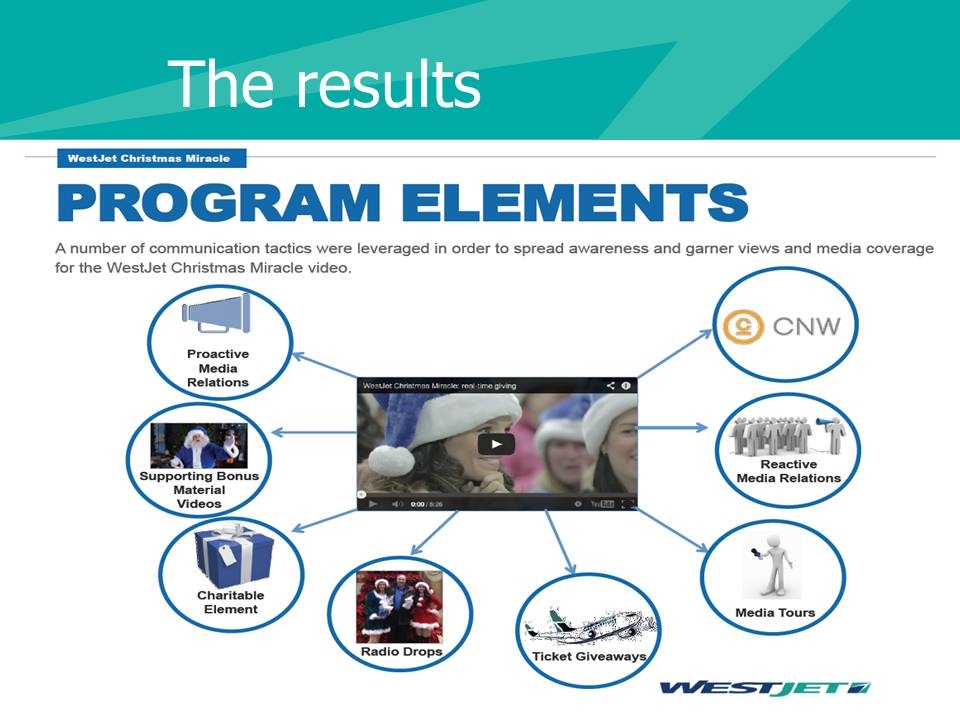 The WestJet Christmas Miracle video was filmed in Toronto, Hamilton (ON) and Calgary (AB), 2 weeks prior to launch ensuring timeliness and seasonality. Nineteen cameras captured the emotional content and the video was unveiled on the WestJet YouTube page on December 9, 2013.

Communications Goal: To stand out during the holidays, create a newsworthy and shareable national campaign that brings joy and happiness to its guests by creating a first-of-its-kind “real-time giving” experience, amplified through a strategic communications plan.

Research: To be shareable amongst target consumers, a content-driven campaign needs to be surprising, funny, or exciting and consistent with the brand essence connecting with the consumer emotionally (Mashable).

Because the campaign was relevant to the masses, our approach was to drive buzz through media, influencers and consumers to create a lift in views immediately upon launch. Coverage helped to drive awareness and consumer views of the video, which elicited social media shares that garnered additional mass awareness around the globe. We exceeded our objectives and overcame challenges through the following tools and strategies: 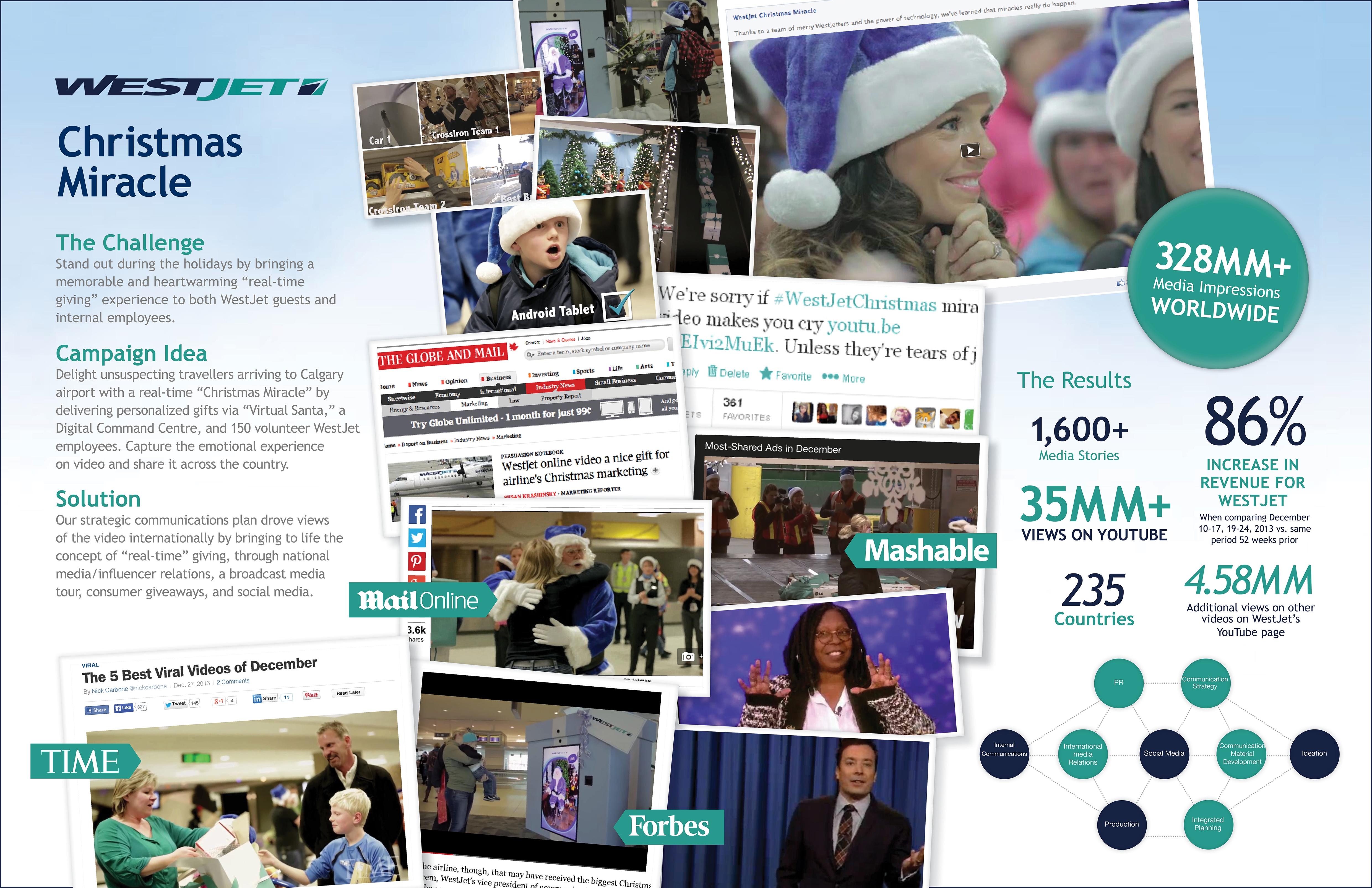 Section VI — CAUSE & EFFECT BETWEEN ADVERTISING AND RESULTS
a)General Discussion

At a time of year when stress levels run high for travelers, Canada’s preferred airline, WestJet, aspired to spread holiday cheer by creating a remarkable and interactive activation for its guests and employees. With the success of the 2012 WestJet holiday campaign, WestJet set out to create a way for its guests to engage with its fun and caring brand culture online and offline, with a goal to exceed the 2012 campaign results in views (500K) and media impressions (26MM).

WestJet delighted unsuspecting travellers with a real-time holiday surprise that delivered personalized gifts to guests arriving in Calgary as part of a true “Christmas Miracle.” Having captured the experience, WestJet posted the video to its YouTube page on December 9, 2013, and within days it was amongst the top five most shared viral ads in 2013 globally. To further extend reach, WestJet and their partner agency developed a strategic social media and communications plan focused primarily on earned and owned media, including an interactive press release, media tour, media relations outreach, promoted Facebook and Twitter posts, WestJet blog posts, and internal awareness. The communications plan drove significant views (35MM+) and awareness (328MM+ media impressions) of the campaign resulting in an increase in sales.

WestJet created an experience for its guests that became timely and engaging online content that captured the hearts and minds of WestJet’s target consumers across the globe.  While, the main objective of this experience wasn’t to drive sales, it certainly did. The content garnered international attention and became one of the most-viewed and shared viral ads of 2013 in the world, increasing WestJet’s sales by 86%, bookings by by 77% and WestJet.com visits by 100% compared to the same period last year. 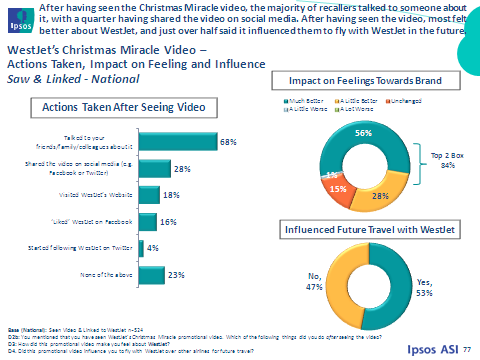 The WestJet Christmas Miracle media relations budget ranged between $37K-42K CND, including strategy development and execution, excluding the cost of media clips purchased, the airport execution and video development.  The cost per contact ($0.0001) was far below industry standard, showing an effective spend in order to exceed objectives by 1000 to 7,000 per cent.

No promo codes, seat sales or specific destinations were pushed or promoted in relation to the Christmas Miracle Video. The focus was on brand building, brand awareness and extending our owners care message at a global level through Social Media.

No distribution change or change to our regular service. We used preexisting scheduled flights in live airports.

No price cutting or high-value promotional activity was used.