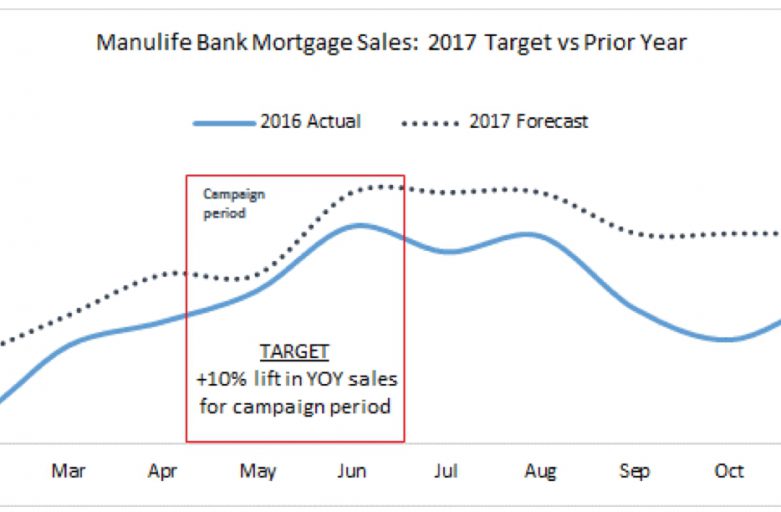 Section IA — CASE OVERVIEW
Why should this case win in the category (ies) you have entered?
With just over 1% market share, Manulife Bank is an underdog in the Mortgage category. Lack of familiarity and Manulife’s heritage as an insurance company have been barriers to the Bank’s growth for several years. Compounding their ability to break through has been the big banks’ concerted efforts to train consumers to evaluate mortgage offers on interest rates, something that the innovative Manulife Bank mortgage product (Manulife One) doesn’t compete on.

In 2017, Manulife Bank developed a program that purposefully drove consumers through a journey from an “awakening” to understanding and ultimately conversion all starting with a unique movie-style trailer that helped them uncover the mortgage truth and achieve their goals.

“This is the first time I think I’ve ever been intrigued and entertained by a bank commercial. They nailed it with those spinning tops, and showing the stress I feel about juggling my finances. I’ve not heard about that Manulife product before so I’d like to look into it.”

The campaign was so powerful that even though there was no real change in Manulife Bank’s share of voice, it drove its unaided awareness up 4 positions in just one cycle, now setting Manulife Bank apart from the pack of “others”.

The major banks spend more than $100MM in advertising per year to attract & retain customers.  With their strong share of voice and lack of product differentiation, the big banks have trained consumers to believe all mortgages are the same with interest rates being the only differentiator.  As a result, 2/3rds of mortgage renewers stay with their current provider making it very difficult for alternate players to gain share[1].

Manulife One is an innovative financial solution in the market place.  Traditional mortgages control the speed consumers can pay down their debt but a Manulife One mortgage is different; it combines a customer’s mortgage, line of credit and banking into one easy to manage account, allowing customers to pay off their mortgage years earlier and giving them the freedom to control their money.

Going into 2017 planning, economic indicators (weaker dollar, rising consumer debt, competitive real estate market) suggested that consumers might be looking for the “safe” choice and continue to default to their main bank for their mortgage, making it even more challenging to change consumer behavior .

With less than 2% SOV[1] in the mortgage category Manulife Bank awareness and consideration rates are low making lack of brand familiarity a key barrier to growth[2].  Furthermore, Manulife Bank struggles with Manulife’s insurance legacy with one in six non-clients saying they don’t like to deal with insurance companies.

However, client research showed that for those consumers who become aware and understand Manulife One, they believe it to be innovative and a product they would consider.  Furthermore, existing Manulife One customer satisfaction is extremely high.  With an innovative product that enjoys high customer satisfaction, the opportunity for Manulife Bank was to simply get more people aware and understanding the benefits of the product.

The core insight we developed that would drive all communication was:

Consumers are trapped in mortgages that are overly confining and restrictive, denying them the freedom and personalization to pursue their goals.

This insight was supported by 2 key conclusions gleaned from various research;

#1  HOME OWNERS FEEL SHACKLED TO THEIR MORTGAGE :  Home ownership rates are near 70% in Canada[1].  But owning a house is not the only goal.  On average, consumers have 4.5 financial goals at any point in time.[2]  Unfortunately, Canadians spend more income on housing than almost anyone in the world leaving Canadians house rich, cash poor.[3]  More than half of consumers say they should be doing more to save for their other priorities[4].

The insight was an ownable territory for Manulife Bank as it steers the mortgage conversation away from rates which Manulife Bank does not compete on and focuses on the unique benefits that only a Manulife One mortgage can provide.

Uncover the Mortgage Truth. A disruptive statement to break mortgage renewers’ inertia, awakening their reality of feeling trapped by their mortgage. To capture attention, this was positioned as a covert operation with an ominous look and feel to be unique in the category, which is known for feel-good, happy imagery.

Video was a key element to our strategy as we had to emotionally connect with the consumer to make them want to take the time to understand that a Manulife One mortgage was different from the rest.

We knew the change in current consumption behaviors, particularly declining attention spans[1] and the rise of on demand services such as Netflix[2] would make it difficult to get noticed.  The creative was designed to address these behaviors by leveraging a movie-trailer format; quick edits, early introduction of the story arc and using the characters as the narrator to engage the viewer.

The creative storyline and branding evolved across multiple pieces of creative to keep each piece focused on singular messaging rather than forcing everything into a single placement and risk losing the audience.

Creative and media had to work hand  in hand to devise how the audience would be exposed to the series of messaging to drive them down the marketing funnel.

Given our challenge was to take the consumer from no awareness through to conversion we devised a journey that would:

This brought us to a multi-tiered, 100% digital journey where we could control the delivery by stage and drive the consumer down the funnel.  Multiple pieces of creative were developed across various formats to accommodate the journey.

Video was the centerpiece of the strategy.  Netflix style video content was developed featuring a couple currently going through the mortgage renewal process.  A trailer format launched the story with a couple that are enlightened by a mysterious group who demonstrate that there is an alternative mortgage solution that works with their lifestyle.  A simple mnemonic showed how you can pay down debt while living your life.

Over 28 pieces of digital & video content were created to deliver an engaging, multi episode story in both English and French.  Each group of assets were measured and optimized on the KPI most appropriate to its job in the journey;

The 3 stage journey happened continuously through the campaign (April – June 2017) allowing for different people to enter the journey at different stages;

Stage 1 – Disrupt “borrower inertia”:  Sequential video delivered a 2-part story.   The first story was designed to intrigue and appeal on an emotional level.  The second story, remarketed off views from the first video, invited viewers to “join us” in the movement.  Placements included a mix of contextually relevant environments as well as entertainment verticals that aligned with the creative theme to hit the consumer in unexpected places.

Stage 2 – Attract: this stage involved intercepting consumers during known or inferred moments of relevance (when they are in the researching stage) with search, display, native and social to drive audiences to the Bank site to learn more.

Stage 3 – Educate: This was an invitation to bring consumers further down the funnel and learn more about a Manulife One Mortgage.  Consumers had the opportunity to be driven onsite via remarketing from the campaign video views.  In addition, because we were combating low awareness, we also provided offsite opportunities where the consumer could complete the Manulife One story without ever having to make it to the campaign landing page (through in-ad engagement units and custom 3rd party content). 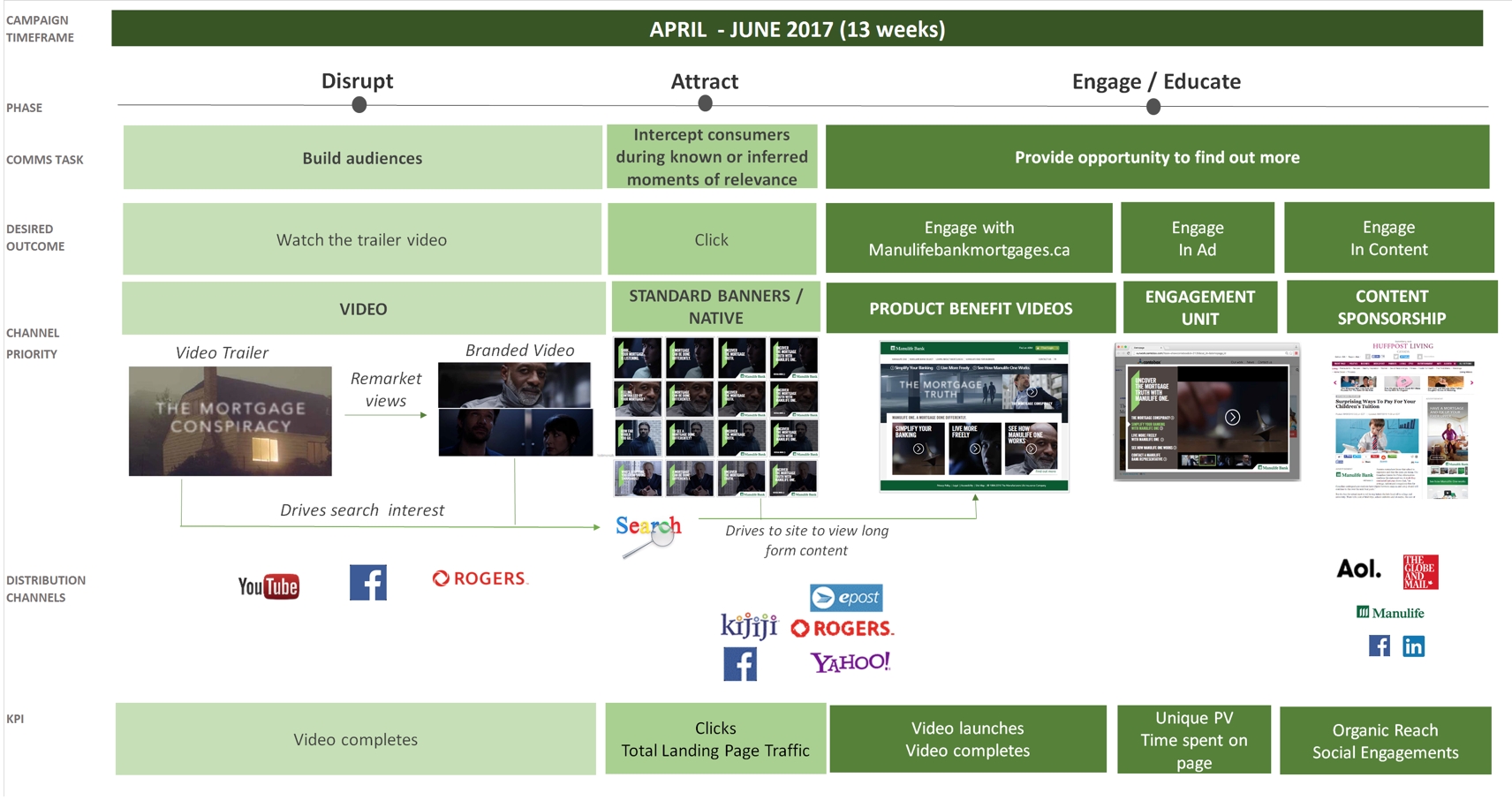 Based on 3rd party research commissioned through Millward Brown;

Campaign exceeded the target by +17 points to deliver a +27% lift in same period YOY sales (versus target of +10% lift);

From a campaign perspective, the program exceeded all ingoing targets;

+10% above goal for Offsite videos;

delivering 29MM views versus a target of 26MM

delivering 335K visits versus a target of 206K

+18% above goal for onsite video views:

Delivering 34K onsite video views versus a target of 29K

Additional highlights include some very strong engagement from the custom content partnership with the Globe & Mail.  Globe readers spent an average of 4:33 minutes with custom articles, with some articles seeing an average time spent of over 6 minutes.

2017 average sales in the time period prior to campaign launch were indexing at 97 versus target with sales only exceeding target once campaign was in market; 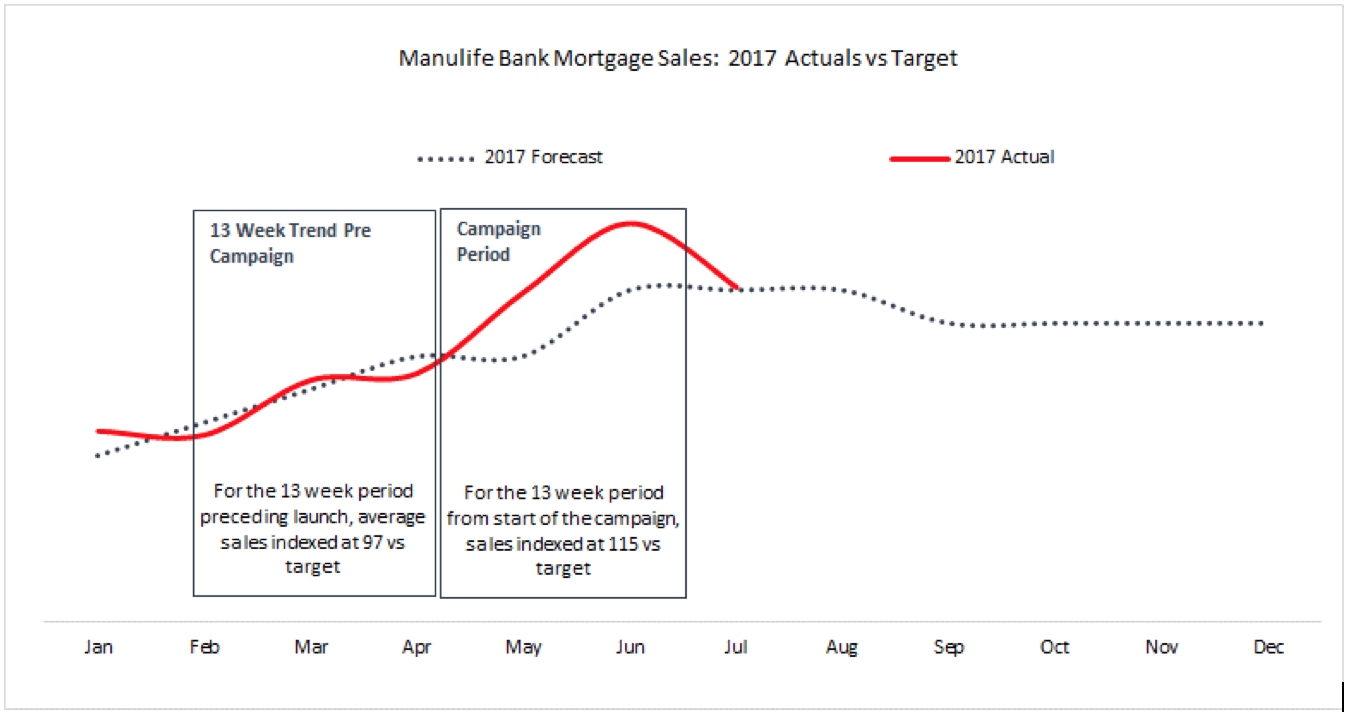