Budweiser Light Up The Nation 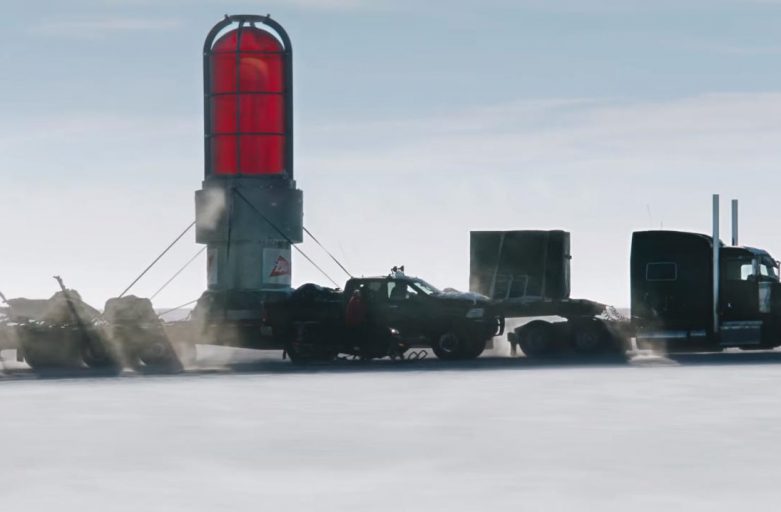 Section IA — CASE OVERVIEW
Why should this case win in the category (ies) you have entered?
The Budweiser Light Up the Nation campaign consisted of an incredible blend of innovation, promotion, and sales-driving tactics that the beer category had never seen before. This campaign allowed Budweiser to turn our physical product into media while using a blended approach that tied the brand directly to one of the most powerful sports moments in Canada, the hockey goal (matching message to medium). Within three weeks, Budweiser had over 500,000 goal-synced glasses (entertainment/technology) in the hands of hockey fans, driving massive brand association to the sport while generating a promotion that truly elevated the game-watching experience for fans (building brand equity).

In Canada, hockey is life. It is also critical to winning the very competitive beer category, as it represents the largest beer-drinking occasion in the country. Molson, Budweiser’s largest competitor, holds the official NHL sponsorship, putting their brand at centre ice of every game. Through this sponsorship, Molson has forged a connection with the same hockey fans Budweiser needed to target.

Budweiser has been the number one beer brand in Canada for the past three years. The introduction of the goal-synced Budweiser Red Light in 2013 cinched its position at the top by ensuring that Budweiser owned the most iconic moment in hockey – the goal. Three years later, the Budweiser Red Light platform is still doing a great job elevating goals, but this does not ensure that fans are enjoying Bud while they celebrate.

In September 2016, when goals mattered most to all Canadians on the global stage, Budweiser needed to develop an innovative way to elevate game time for hockey fans. By deepening the emotional connection to Budweiser and hockey, the ultimate aim focused on increasing brand preference and consumption through the communal celebration of goals.

Despite being the number one beer brand in Canada, Budweiser was suffering from a meaning and relevancy gap with our largest competitor, Molson Canadian.  To combat this, we needed to tap in to hockey pride, making Budweiser synonymous with hockey goals and ensuring our product was in the hands of every fan during game time.

After three full years of success with the Budweiser Red Light platform, we were confident in our strategy of winning support by elevating game time for the everyday hockey fan. We continued to ask ourselves, “As hockey’s biggest fans, how could we inspire all of Canada to celebrate goals with a Bud in hand?” In doing so, we uncovered three major “aha!” insights that allowed us to elevate and expand the Budweiser Red Light platform during the biggest month of hockey.

1) Traditional sponsorships can be important, but access to logos doesn’t truly capture Canadians’ love for the game. More important is the sense of community, anticipation, and excitement of the game that wins hockey fans across the country. This is very much inline with the values of Budweiser. We recognized that the most exciting moment in hockey is the goal. If executed correctly, we could associate ourselves with the greatest moment in the game, when fans’ emotions are at their peak. Over time, Budweiser would be part of Canadians’ greatest hockey memories at home.

2) We needed to create something tangible for our target, hockey-loving males aged 19 to 49, that was also accessible to all fans, not just those who could afford a seat in the arena or afford a Budweiser Red Light. Data uncovered that a staggering 83% of our target love hockey but have never experienced it live because of expensive ticket prices. Instead, fans gather with friends at their favourite bars and house parties to watch the game. These fans deserved to have their game amplified and get a taste of the real arena experience and celebration.

3) When it comes to international competition, Canadians have a deep-rooted desire to let the world know that hockey is our game and they love nothing better than getting together with fellow Canadians to celebrate our goals.

With these insights in mind, we asked ourselves, “How can we bring the arena experience and the epicentre of goal celebrations into Canadian homes?” The answer: bring fans closer to the goal-scoring moment and democratize the red goal light.

Budweiser would deliver that feeling of a goal celebration in an arena and put it directly into the hands of fans. By arming the nation with a goal-synced Red Light beer glass, Canadians would “Light Up the Nation” and connect goals directly to our product.

When Budweiser introduced the Red Light three years ago, it gave the brand a right to play in hockey. But when Canada plays against the world, hockey becomes more than a game, more than a sport – it becomes a matter of national pride. September 2016 was a historic moment when hockey fans across the country would come together behind Canada’s team. This was a new opportunity for Budweiser to solidify its position as the true supporter of Canada’s hockey fans. The brand would do more than connect itself to the goal moment by making sure every Canadian in all corners of the Great White North had a Budweiser in hand while celebrating on the global rink.

We knew the month of September 2016 would be a big one for hockey fans, but it was also a short window to activate a retail-connected national campaign. We had incredibly aggressive earned media targets, so we decided to start talking about our plans for September a full eight months before the first puck dropped in Toronto. We had our first discussion to own the hockey conversation before our competitor knew it was even coming.

We built a comprehensive content and distribution strategy and executed an eight-month campaign to drive awareness and momentum, culminating in Budweiser owning the biggest month of hockey.

We declared our intention to Light Up the Nation starting with a 60-second Super Bowl spot to introduce Canada’s Goal Light – a 25 foot tall, fully functioning goal light, set to light up every time Canada scored a goal. On this largest stage for sport fans, the TV spot announced that we would be embarking on an audacious two-month journey to the top of the world in the deep Arctic, where the light would literally and figuratively light up the nation with each Canadian goal. This tactic secured earned coverage and showed our dedication to Canadian Hockey fans. 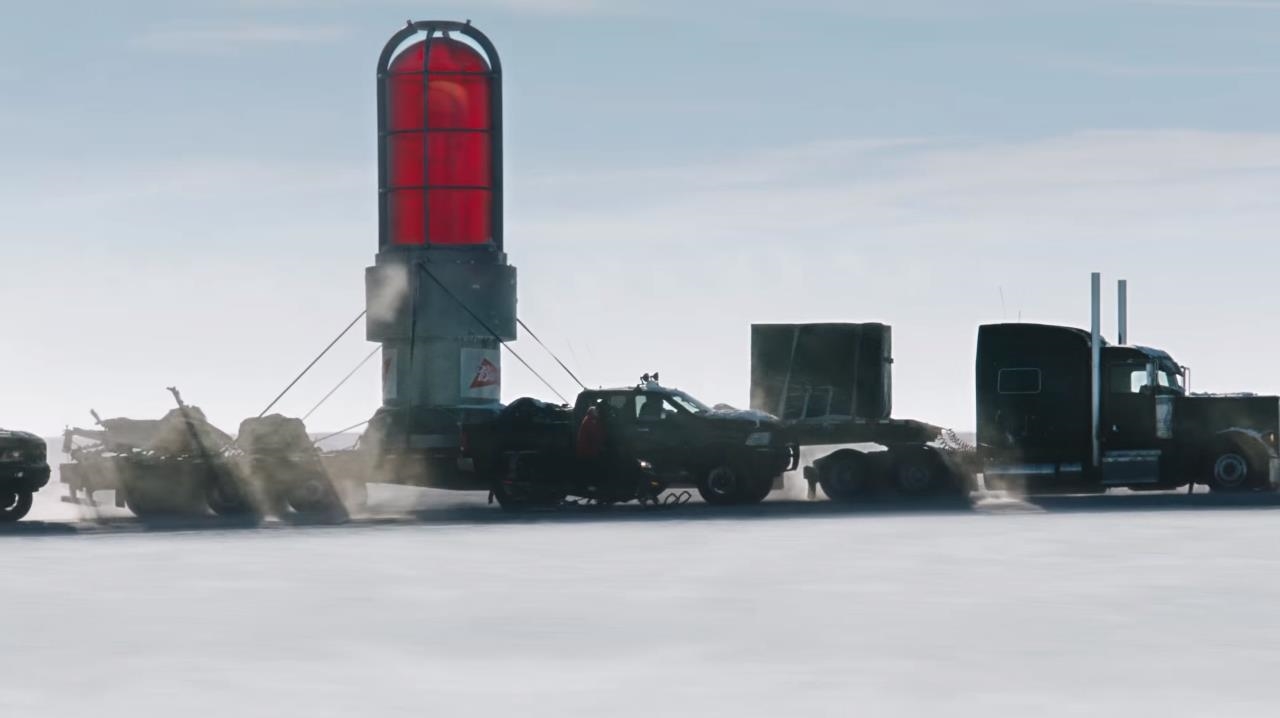 This was backed with a tactical 30-second spot, social media campaign, and PR push, as Budweiser toured Canada’s Goal Light around the country, stopping in seven major cities. Fans could sign up on Budweiser.ca to have their name engraved on the light alongside hockey heroes Wayne Gretzky, Paul Henderson, and Don Cherry. The cross-country tour helped drive credibility and affinity for the brand on a national level. In the end, over 20,000 names were engraved on the country’s newest beacon of goal celebration. Canada’s Goal Light was packaged up and sent on its journey to celebrate our biggest September goals on top of the world. 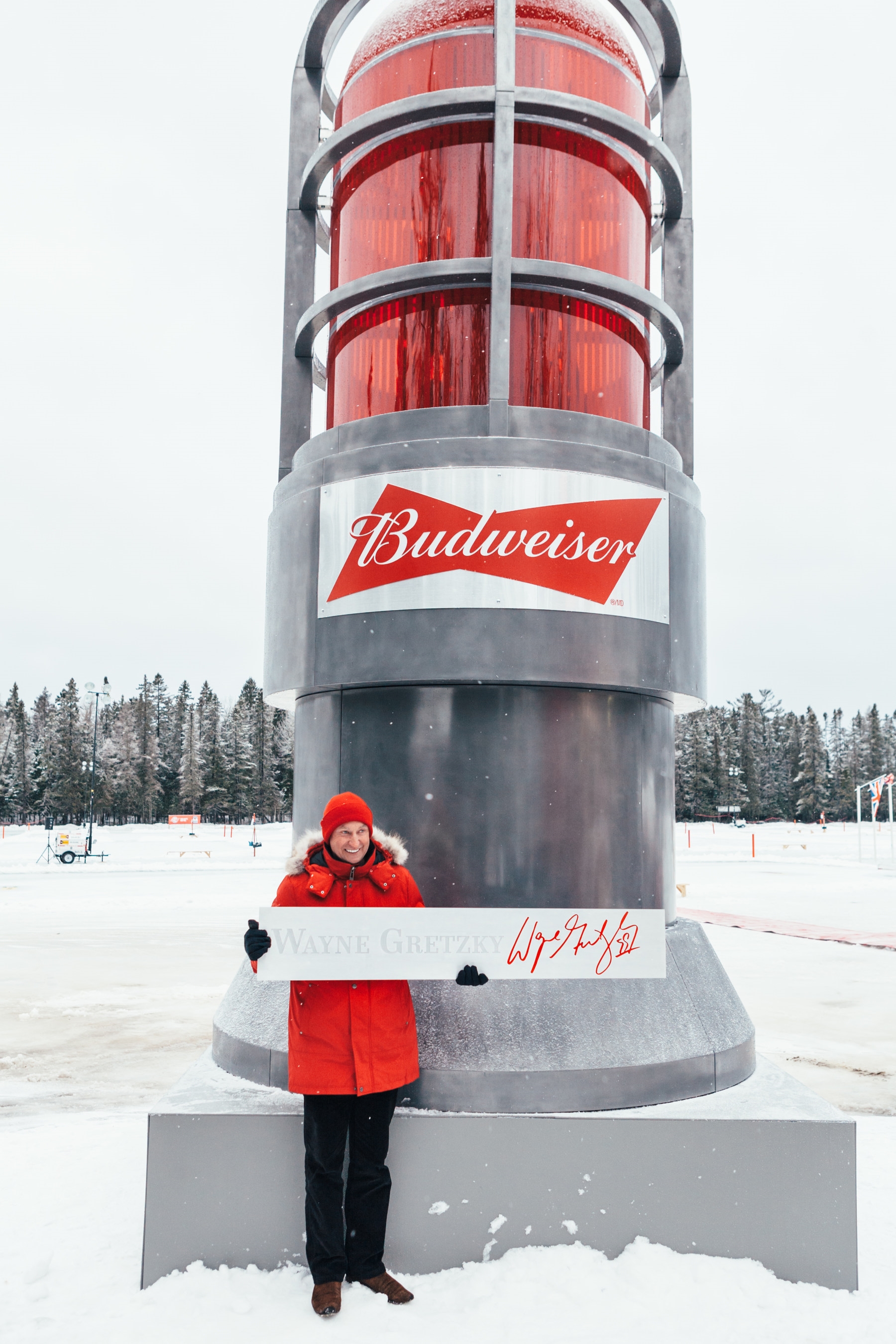 Then we did the unthinkable. Just weeks before the first puck dropped, we introduced Canada to our newest innovation – goal-synced beer glasses, free in specially marked cases of Budweiser. Utilizing a hard hitting 15-second TV ad, influencer play and social media content, and goal-synced OOH, we owned hockey in the month of September before a single puck dropped. 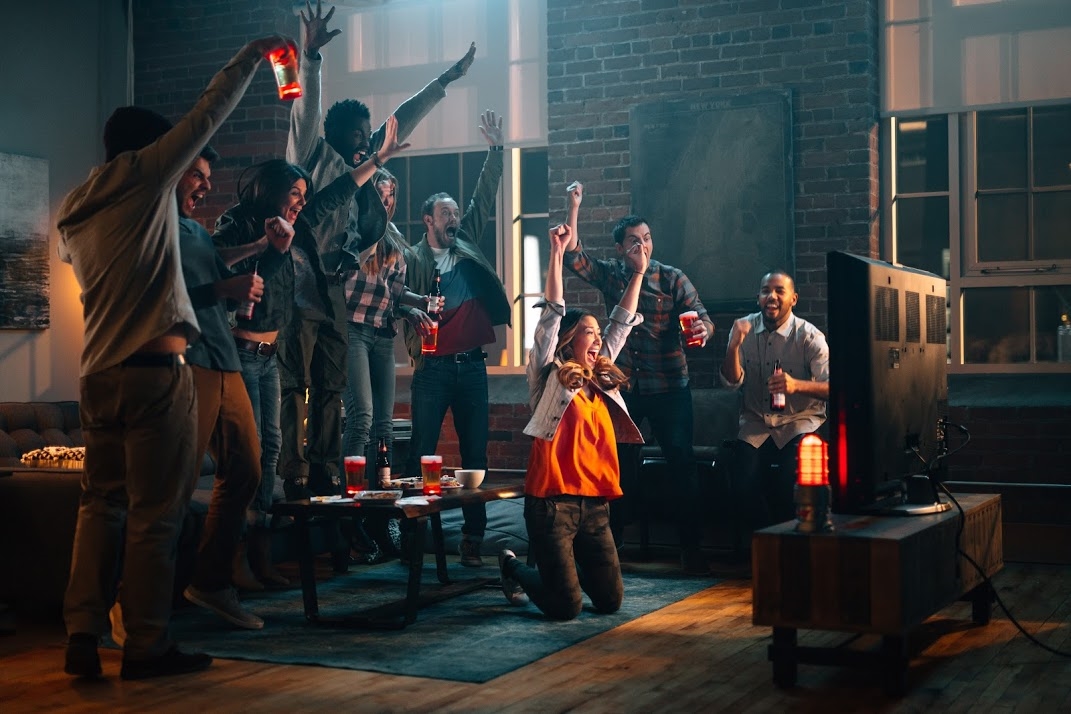 On game day, a series of trash-talking dynamic Red Light digital OOH activations appeared, pumping up Canadians as we prepared to take on the world during the month of September. But what made them truly unique was that they were synced to every Canadian goal using a live scoring feed. The creative was dynamically served when Canada scored and transformed the OOH billboards into giant red lights. The second we scored, the OOH billboards lit up in celebration, letting all of Canada know it was time to cheer. Partnering with Snapchat, we created a lens for game days, providing Canadians with fun tools, including a hockey helmet filter that they could customize and share with friends, to help celebrate goals and mock their rivals. 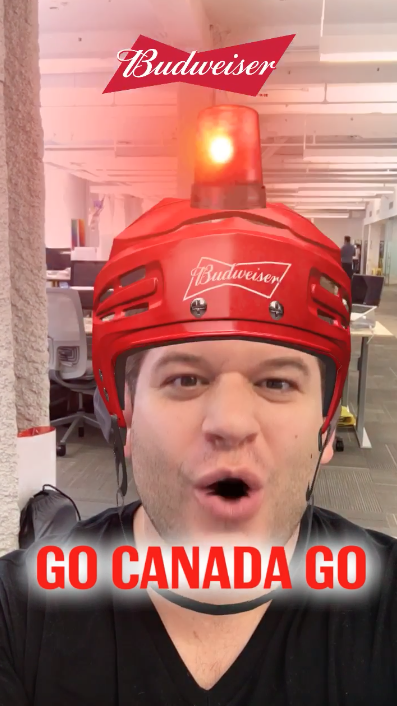 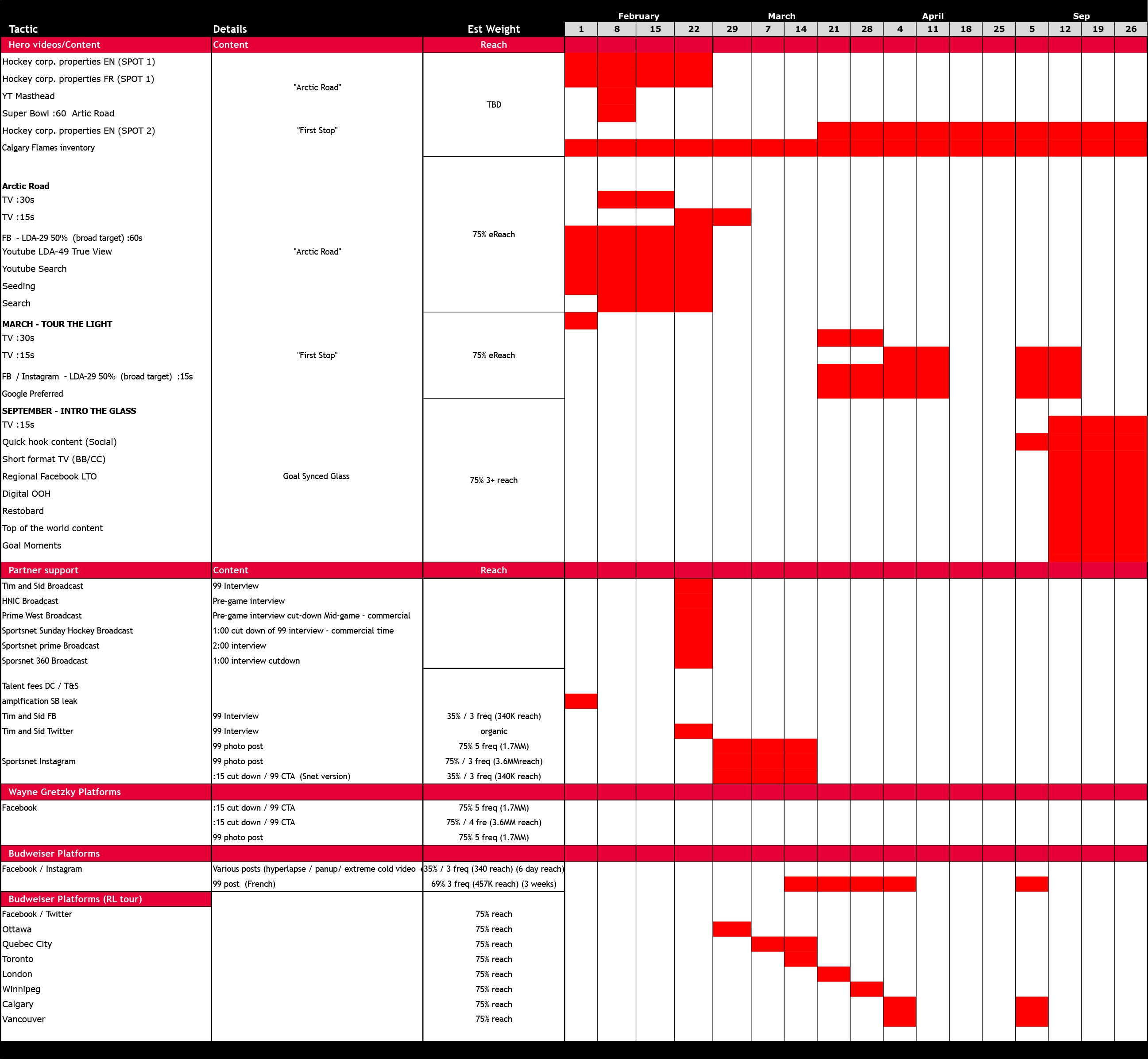 During a short three-week retail window, we had over 500,000 goal-synced glasses activated in the market, which trended the Budweiser Red Light app to the top spot on the Apple Store. Glasses began appearing on eBay for upwards of $100.

Once the specially marked cases hit shelves, hundreds of questions poured in every day. We saw a 1808% increase in incoming messages inquiring about the glasses on social media channels alone. 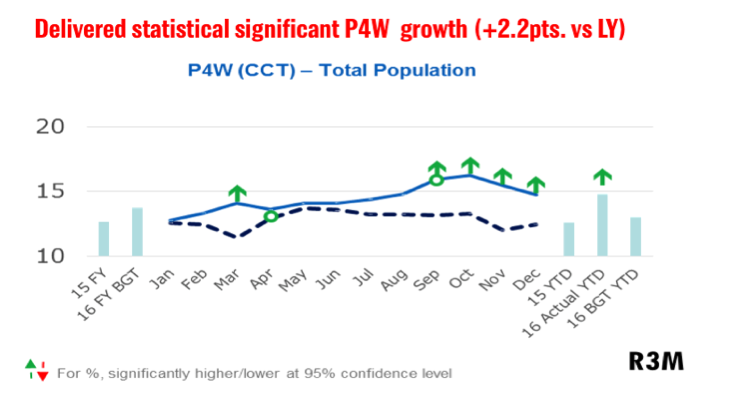 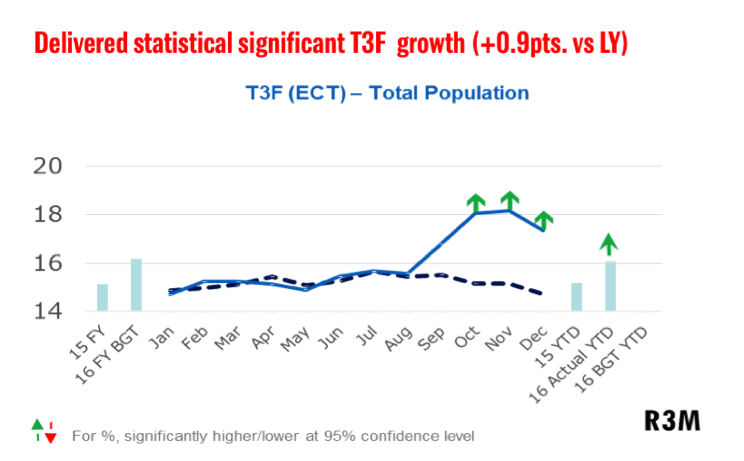 Result: Grew share of segment (+0.28 points. vs. last year) at the expense of key competitors 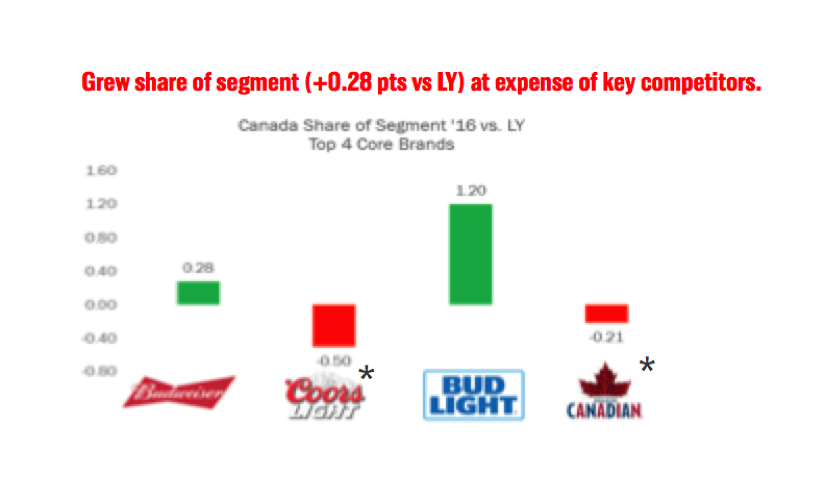 Result: This campaign drove an outstanding 95 million impressions (in a country with a population of 36 million), successfully making this the highest-ever earned reach for a Budweiser hockey campaign to date.

Light Up the Nation also delivered big social media results, rallying an entire country around their passion for hockey and cementing Budweiser’s role as the champion of Canada’s game.

Our Snapchat Lens was viewed 4.2 million times in a single day, the average play duration (effectiveness) was 24% longer than the Snapchat Canadian average, and our cost per view was an astonishing $0.01 – all of which propelled this media placement to the Top Snapchat Lens for alcohol brands in Canada for 2016.

A true media first, we also introduced a 25 foot tall, 1,200 pound, fully functioning, goal-synced hockey goal light that travelled all across Canada before ending up at the top of the world. Fans of legal drinking age could sign up on Budweiser.ca to have their name engraved on the light alongside hockey personalities Wayne Gretzky, Paul Henderson, and Don Cherry. To heighten awareness, we leveraged hockey celebrities and sports influencers, using regionally targeted social media to amplify the excitement as the Goal Light travelled. In the end, over 20,000 names were engraved on the country’s newest beacon of goal celebrations.

Light Up the Nation beat both the ABI NA benchmark ROI and global benchmark by .41 and .42, respectfully.

The Budweiser Light Up the Nation campaign was an incredible blend of innovation, promotion, and sales-driving tactics, the combination of which the beer category had never seen before. Overall, the campaign was effective in the following ways: 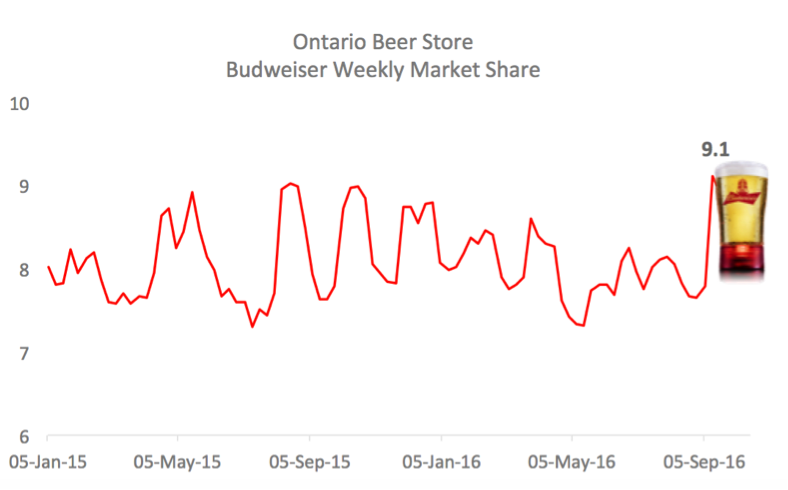 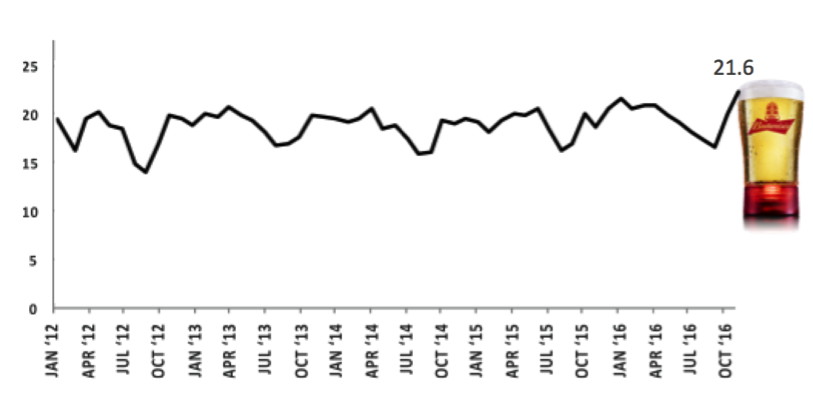 The chart below summarizes the last five years of media for Budweiser hockey programs. One item to note is the significant increase in GRPs in 2016 versus all other years, which was due to a major international hockey tournament happening the same year; as a result, multiple Red Light TV spots were active and required incremental support; however, individually their budgets remained consistent year over year. Post-campaign research shows substantial shifts in all three major image attributes that Budweiser tracks and which contribute to overall brand health and equity. This also shows the brand did not have upward momentum prior to the campaign. 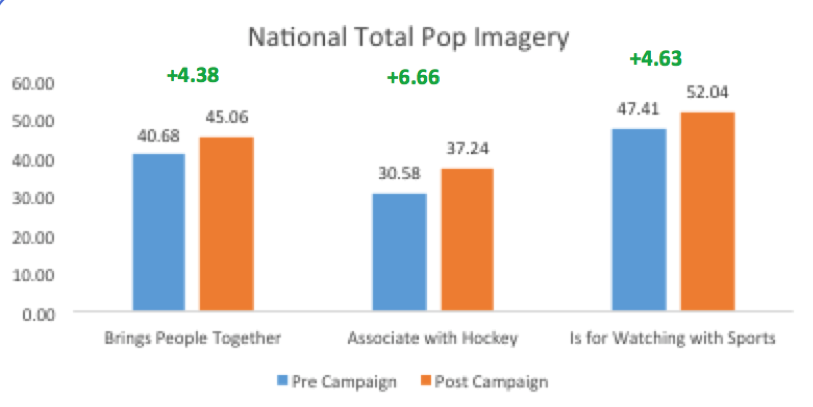 While in the beer category there are variables, such as regional pricing, that can affect sales results, we believe there was a strong relationship between our marketing activity and results, as there were no major pricing changes or discounts during this campaign.

There were also no drastic changes in distribution/availability of Budweiser during this campaign.